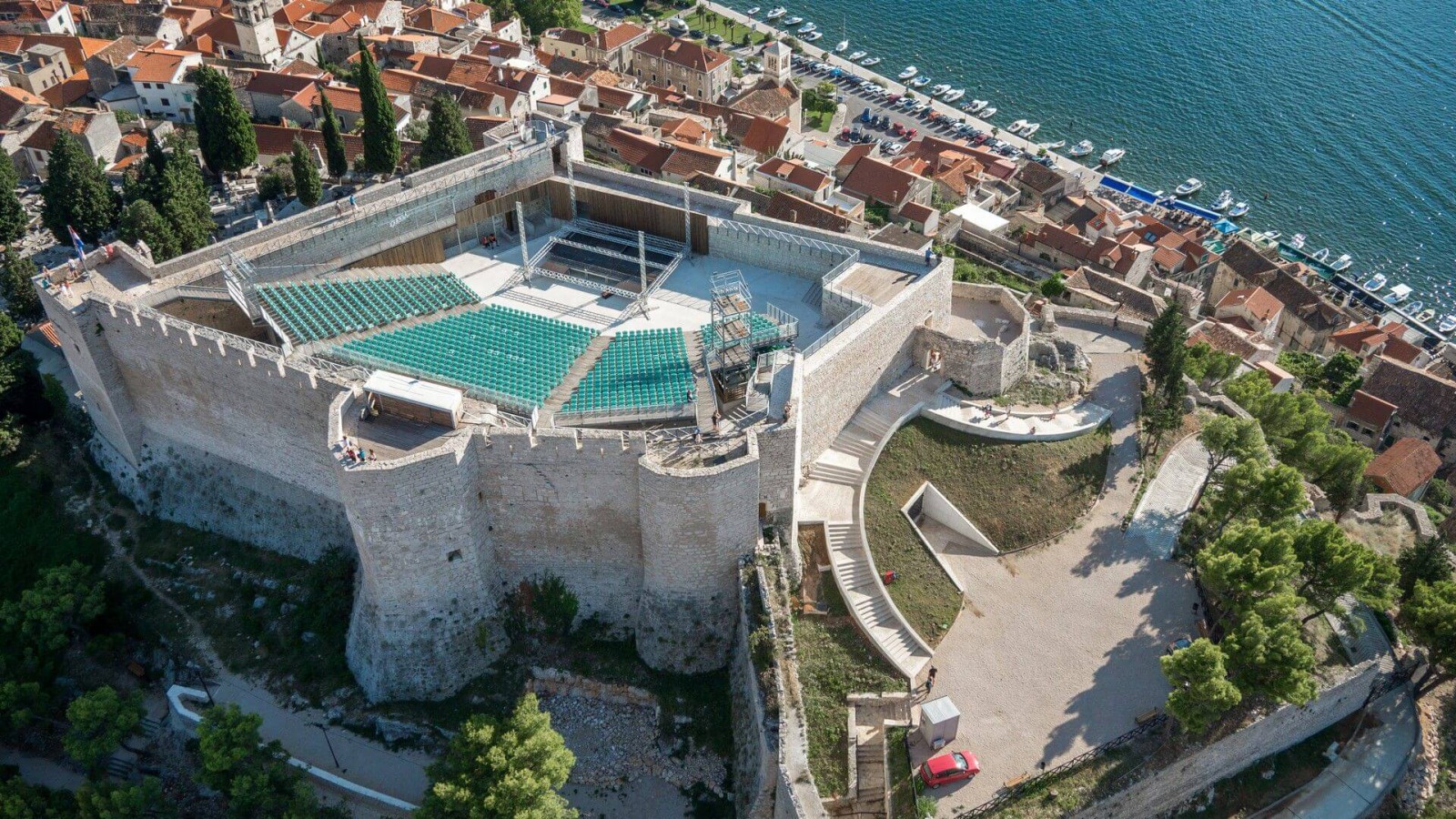 Šibenik is a charming city on the Croatian coast that will impress you with its culture and natural beauties that you can experience in its immediate vicinity. Rich history, beautiful islands and two amazing national parks (Kornati and Krka) are a guarantee that your every day in this city will be full of wonderful experiences.

The citizens of Šibenik are especially proud of the fact that their city was founded by the Croatian king Petar Krešimir IV, which is why you will often hear that Šibenik is also called Krešimir's city. In any case, there is something for everyone here, whether you are coming on a day trip or on a longer vacation in one of the villas in Šibenik, but you should not miss these sights.

The tourist offer of Šibenik is characterized by many sights, one of the greatest masterpieces of architecture in Croatia, the Cathedral of St. Jacob, which was built over a century, is certainly the largest. Therefore, traces of as many as three different styles (Gothic, Renaissance and Gothic-Renaissance) can be seen on it, and the fact that the entire building was built without binding material, entirely of stone, is especially impressive.

The construction of the Šibenik Cathedral was supervised by Juraj Dalmatinac and Nikola Firentinac. An interesting faact about this cathedral is that 71 stone heads stand out at the cathedral, more precisely they're extremely detailed portraits of people from the life of Juraj Dalmatinac. There is also an impressive dome, but the interior of the Cathedral of St. Jacob will leave you equally breathless.

Because of all this, including its beauty and uniqueness, Šibenik Cathedral is also on the UNESCO World Heritage List. 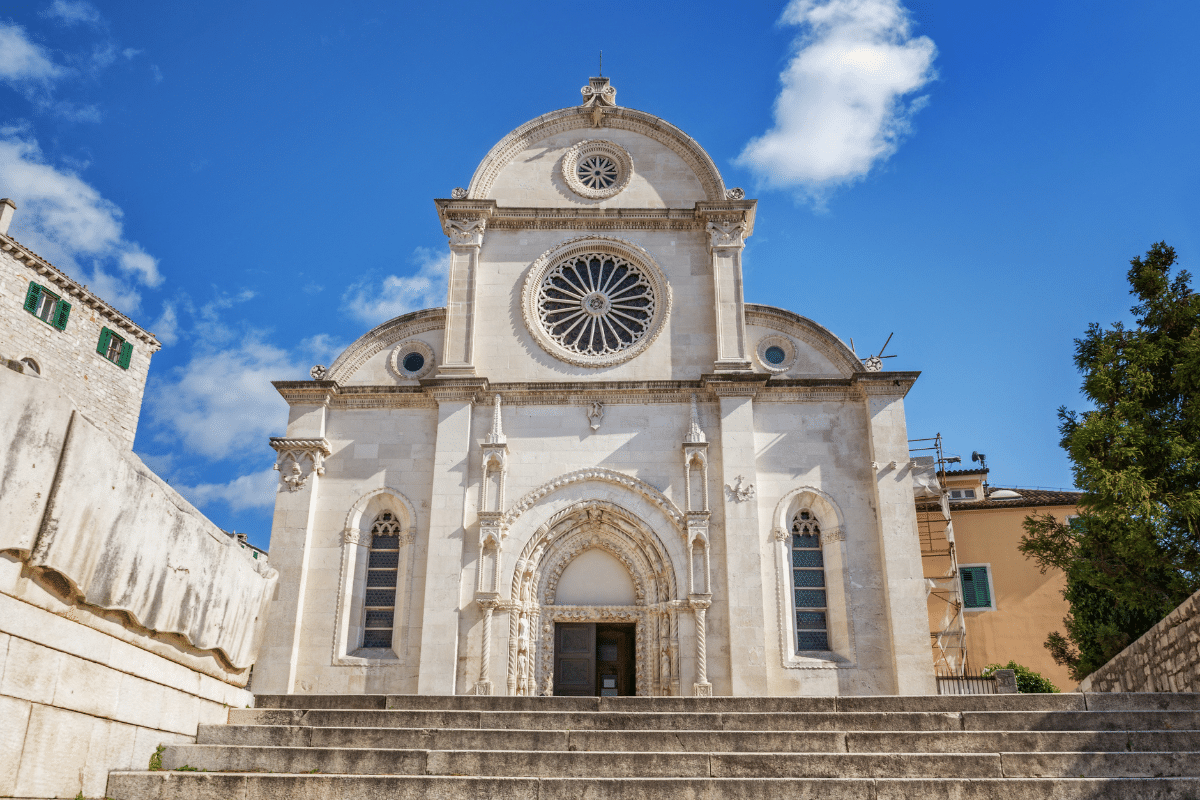 Next to the cathedral, one of the main symbols of Šibenik are its fortresses. To be honest, if you come to Šibenik and do not visit at least one of them, you will really miss a lot.

Each of these impressive buildings has a special story behind it and each has a special meaning for the city of Šibenik and all who live in it. And as you'll see when you visit them, Šibenik fortresses are still very much alive today, especially in the heart of the tourist season.

But they are also much more than just tourist attractions because these fortresses actively participate in the cultural life of the city.

Fortress of St. Mihovil is the oldest of the four Šibenik fortresses, and it was named after the Archangel Michael, who is also the protector of the city. This edifice has a rich and turbulent history during which it has suffered much damage in various conflicts, but the fortress has been rebuilt over and over again, the last time in the 18th century.

However, what makes this fortress really special is its location. The Fortress of St. Mihovil offers an incredible view of Krka and the entire Šibenik Bay, and the sunsets observed from this place are something that is really difficult to describe in words.

With all this, the Fortress of St. Mihovil is also equipped with a stage and stands that receive about 1000 people. That is why various concerts and performances are organized here in the summer, which become something truly magical under the stars and in such an environment. If you get a chance to attend something like this, especially if you’re in town with a loved one, don’t miss it for anything.

Fortress of St. Nicholas is probably the most famous of all four Šibenik fortresses because it is the second monument from this city that proudly bears the title of a building under the protection of the UNESCO World Heritage.

Other than that, the location of this building is sure to win you over. The thing is that the Fortress of St. Nicholas was built on the small island of Ljuljevac in the bay in front of the town, which occupies it almost completely.

If you decide to come to the city by boat, a really special scene awaits you, but if you come to Šibenik by land, you won't be any less impressed. Actually, a very beautiful promenade leads to it so you can enjoy the sun, the sea and the unique cultural monument.

It should be said that the fortress has retained its original Renaissance architectural solutions throughout all these centuries, and has recently been restored so that, now it shines in full splendor. Take some time to visit this beauty and you will certainly not regret it. 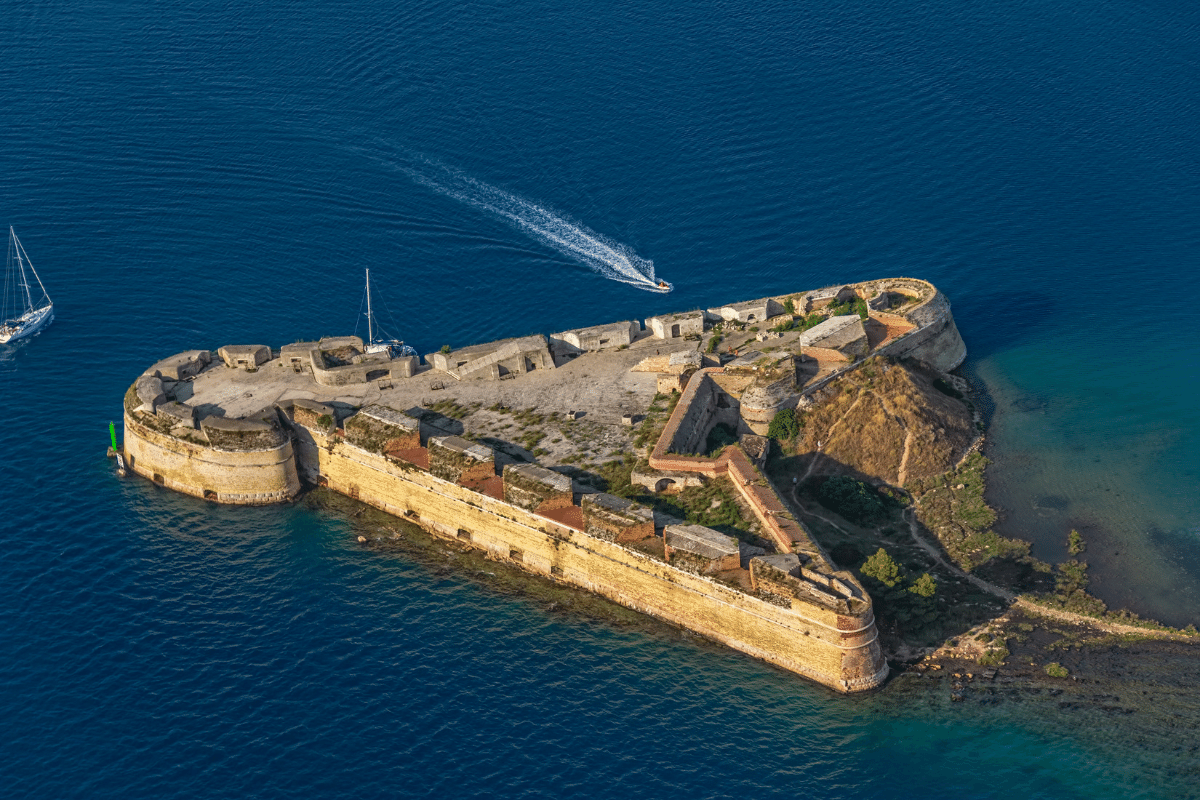 The Barone Fortress is also known as Šubićevac, and dates from the middle of the 17th century when Šibenik, under the administration of Venice, was preparing to defend itself from a major attack by the Turkish army. The defenders withstood and defeated an army of over 25,000 Turkish soldiers. Depending on the name we are talking about, it was named after Baron Degenfeld, who managed its construction, and after a Croatian noble family.

Barone Fortress is perhaps the best option for families with children from all four fortresses Šibenik, because it offers a handful of different facilities that show the history and culture of Šibenik from different perspectives. For example, visitors can use augmented reality to travel into the past and explore the city as it was at the time this building was built.

There is also an excellent Mediterranean food center where visitors can enjoy a garden full of indigenous herbs, but also learn a lot about local gastronomy. So, it is easily possible that you lose a couple of hours while touring this fortress.

The Fortress of St. John is towered over Šibenik thanks to its location at more than 100 meters above sea level. But behind it there's a beautiful story about the unity of all the people of Šibenik.

In recent times, the Fortress of St. John has gained world fame by appearing in the mega-popular series Game of Thrones, which is why every year it is visited by many tourists who are also fans of the World of Westeros.

Currently, the fortress is undergoing a renovation process, so it is possible that access to guests will be difficult or even impossible. 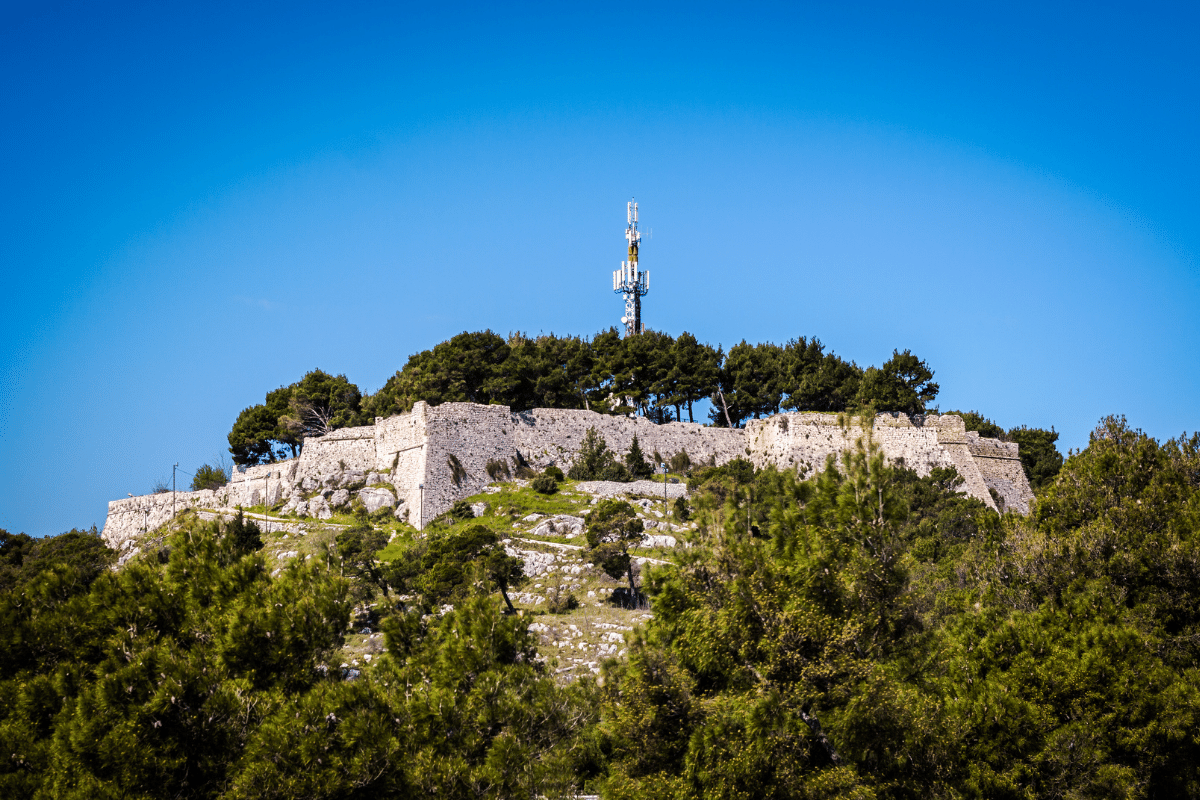 Sightseeing the Šibenik Cathedral itself is not the only way to learn something about this impressive building. Just the opposite - a visit to the Civitas Sacra Interpretation Center will allow you to admire the many exhibits related to the period of construction of the most famous church in Šibenik.

This fantastic museum has recently undergone a thorough renovation and now allows all visitors to enjoy the story of the Šibenik Cathedral through the latest technologies which provide a whole new look at all the treasures found here.

The Center puts visitors in the role of a pilgrim which slowly discovers the connection between the people of Šibenik and their cathedral, starting with various material goods all the way to the spiritual importance that becomes more and more obvious as you progress through the exhibition.

The museum also offers some special features, such as the ability for visitors to see how their name is engraved on the stone, and you can also see how your stone head would end up on the perimeter of the cathedral. In any case, you will not be bored here. 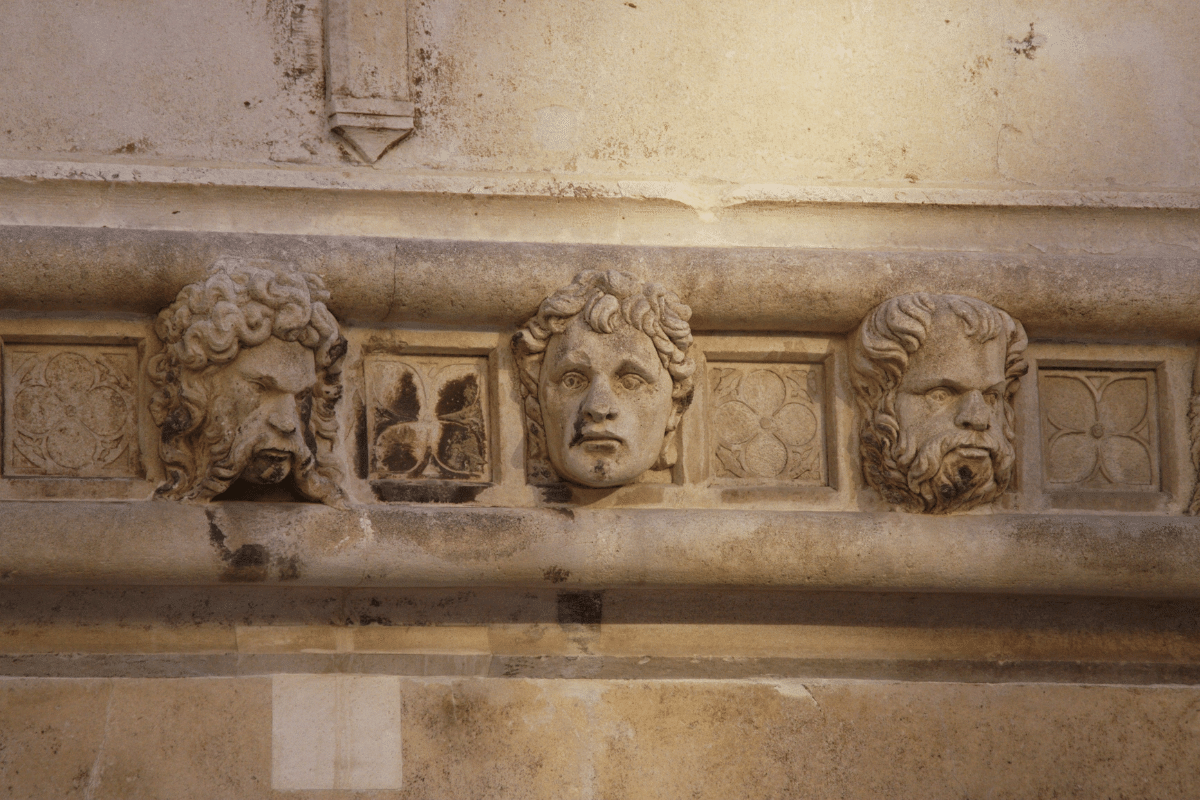 Šibenik City Hall is located directly opposite the cathedral and is one of the most important and most beautiful cultural monuments in the city. It was built in the first half of the 16th century and is an excellent example of High Renaissance architecture.

The facade is decorated with large lion heads, and in the beautiful hall upstairs there used to be city council sessions. Today, wedding ceremonies are held here and various important events are organized, while on the ground floor there is a catering facility (enjoying the sun in this place with a cold drink or coffee is certainly not a bad idea). On the left side of the town hall you will also notice a small bell tower that once marked the beginning of each session.

During the Second World War, the town hall was unfortunately completely destroyed, but soon after that it was carefully reconstructed and there is no difference from the original edition today. The City Hall in Šibenik is therefore a place where you can get to know the past of this city a little more, but also a place where you can stop, take a break and simply enjoy the city. 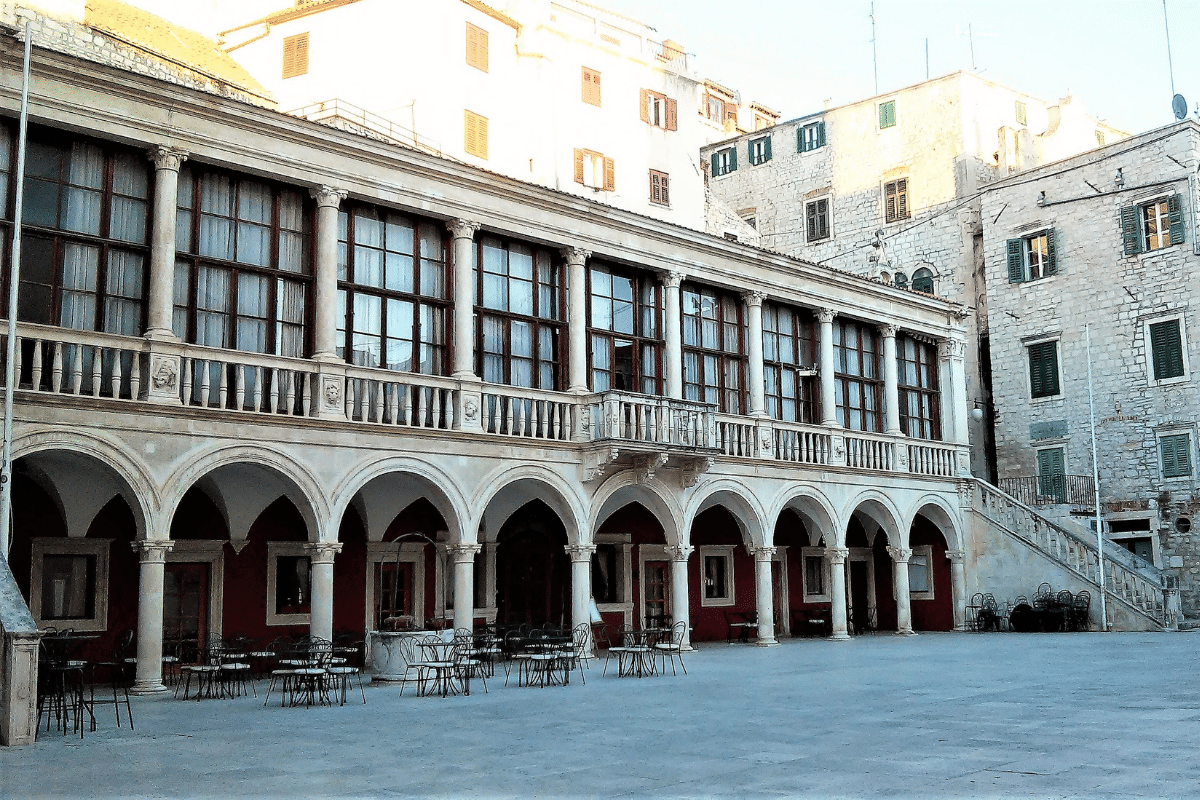 If your goal when visiting Šibenik is to enjoy the natural beauties without leaving the city, the St. Anthony's Canal should be your most important destination. This 2.5 km long canal has always been crucial in the defense of the Šibenik Bay, and today there is a beautiful promenade.

That is why it is easy to enjoy the natural wealth that this location offers - Aleppo pine forests and the smell of the sea that surrounds you will have a relaxing effect on everyone, but here you can find about 600 other plant species. The sea in this part of the Adriatic is also extremely rich and contains many species of shellfish and fish.

There are also many interesting places from a cultural-historical aspect because at the entrance to the canal you'll notice the remains of old towers that represented the first defense of the city from enemy ships. Nearby is an interesting cave in which the church of St. Anthony used to be located, and on the sea in front of you, of course, is the Fortress of St. Nicholas.

At the end, let me share with you some information about this beautiful city that you may not have known. For example, did you know that Šibenik is the first city in the world whose public lighting was powered by electricity? That happened back on August 28, 1895, and even today it sounds a bit unreal that this city was the first to introduce such an epochal innovation.

Also, Faust Vrančić, a great innovator and inventor from the 16th century, was born in Šibenik. Vrančić is credited with the invention of the parachute, suspension bridge and cable car, and he spoke no less than seven languages!

Of course, Šibenik is the city where the unrepentant Dražen Petrović was born, one of the greatest European basketball players of all time.