Beaches in Zadar you need to visit

Zadar and its surroundings abound in beautiful sandy and pebble beaches. You may be wondering how to choose the “right one”? Or at least the right one for you. More importantly, how to choose the beach where you'll have some peace and be able to safely spread a towel?

Depending on your preferences, in Zadar you'll be able to find secluded beaches that will reward you with clear sea and happy crickets when you finally reach them. You may also find other beaches near the historic center, where you can combine pleasant with even more pleasant - summer coffee, a walk around the center and maybe some ice cream after swimming. Just perfect to refresh.

When you are already in Zadar, it would be a shame not to walk along the legendary Kalelarga Street, about which many songs have been written and sung, and to see the many historical sights along it. It's impossible to bypass the church of St. Donat from the 9th century and the ancient Roman forum where it is located, the nearby Cathedral of St. Stošija from the 4th century, Five Wells Square built during the Turkish siege or pass through the main gate of Zadar - the Stone Gate - which is adorned with an artistic depiction of the patron saint of the city St. Krševan. Passing through the Gates, you will reach the Port of Foš, and in the evening continue walking along the sea to the famousSea Organ and Greeting to the Sun.

Obviously in this historic city you have a lot more to do and see besides the beaches. Maybe you went to Zadar precisely because of its cultural and historical importance, so you decided to take a break on the beach from constant sightseeing.

Regardless of your reason for the visit, if you're in Zadar - enjoy. And in order to make your day even more relaxing, we recommend our favorite beaches in Zadar and its surroundings so that you don't have to think anymore about where to go swimming and chilling!

Equally popular with locals and tourists, this half-pebble, half-sandy beach with a smaller concrete section offers just a little bit for everyone. It is located only 4 km away from Zadar, which is ideal for a pleasant walk.

When you finally reach it, you'll be able to cool off in the shade of the pine forest that surrounds it and enter the sea quickly and easily. The access to this beach is very gentle, so it is a favorite among families with children. Additional activities for its younger (but also older) visitors include pedal boats and a water park, and seniors can try sailing, banana or tube riding, volleyball or simply rent a deck chair and relax to the sound of the waves and then sit in a nearby restaurant or coffee shop.

To emphasize - this beach is, due to the exceptional purity of the sea, winner of the Blue Flag, which adorns it and attracts all those who want crystal clear and clean sea. On top of that, it is adapted for people with disabilities and wheelchairs so it is really suitable for everyone! 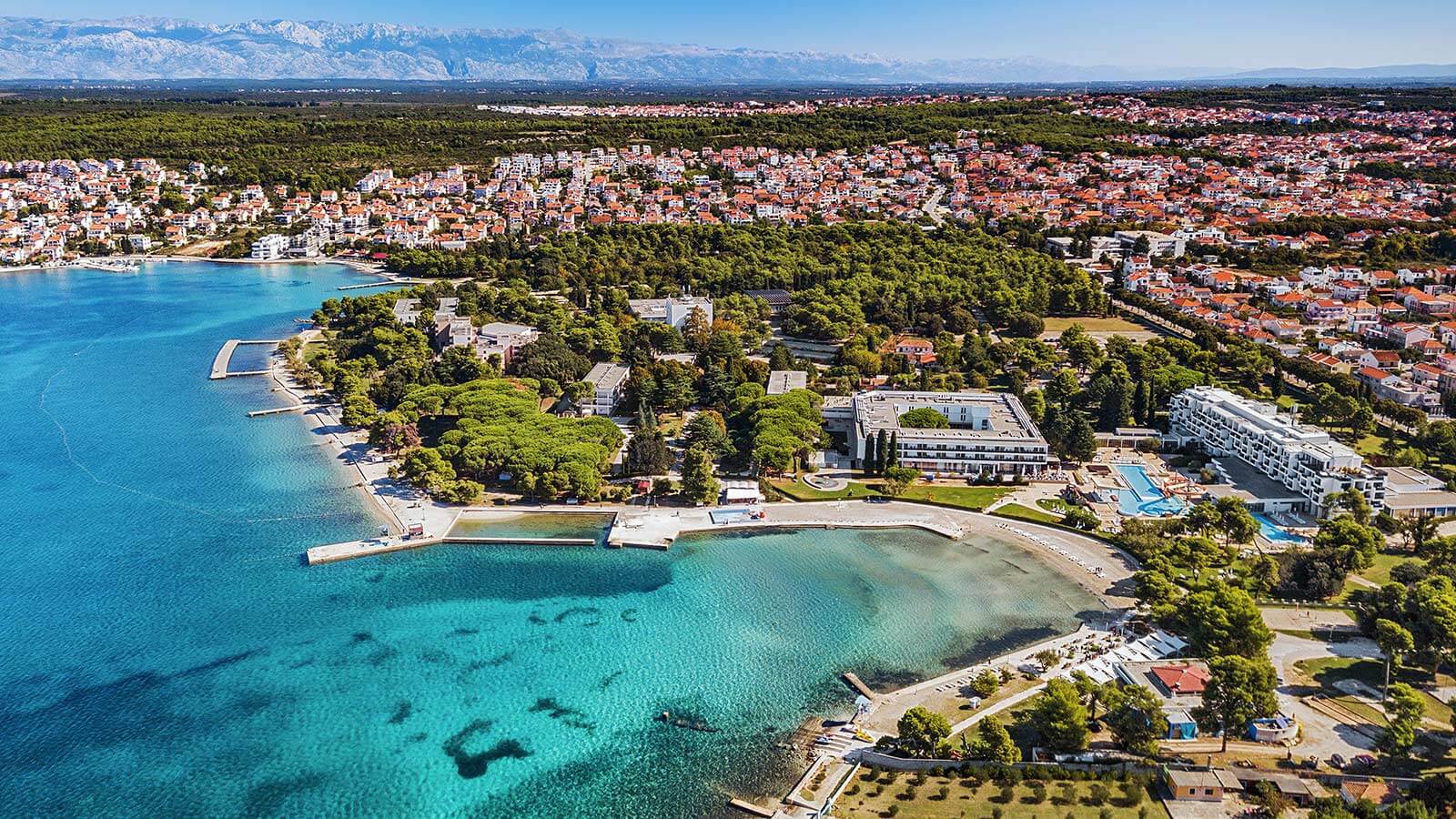 Uskok beach, also known as Vitrenjak, is located just a little east of Borik. It got its second name thanks to the pleasant wind that offers refreshment for hot summer days and makes it the perfect choice for sailors!

With all that, this stone beach is a real blessing in terms of clean sea and natural shade of pine trees. 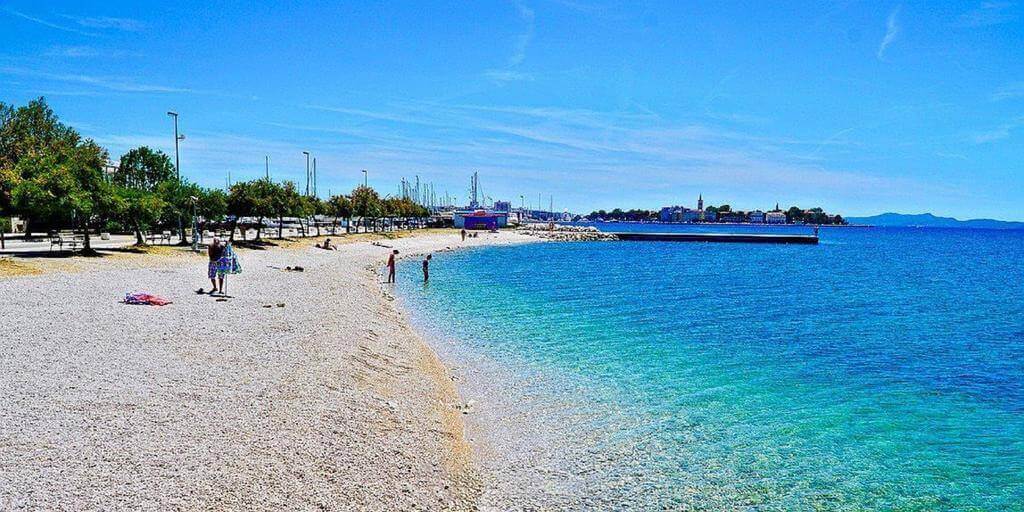 Kolovare beach - near the city center

This is one of the most popular beaches in Zadar for several reasons. We have already mentioned the cleanliness of the sea and the beach itself and the proximity of the center, but the ambience is fantastic! With natural shade thanks to pine trees, this beach is adorned with straw umbrellas that give a real summer flair.

The beach itself is pebbly and offers a wealth of facilities: volleyball, water polo, floating aquapark, pedal boats, kayaks, and so on. In addition to the mentioned beach bar, there are several cafes and stalls where you can refresh yourself with ice cream. After that, you can sit with your ice cream next to your favorite person on one of the many benches in the shade and enjoy the summer environment before heading around Zadar. 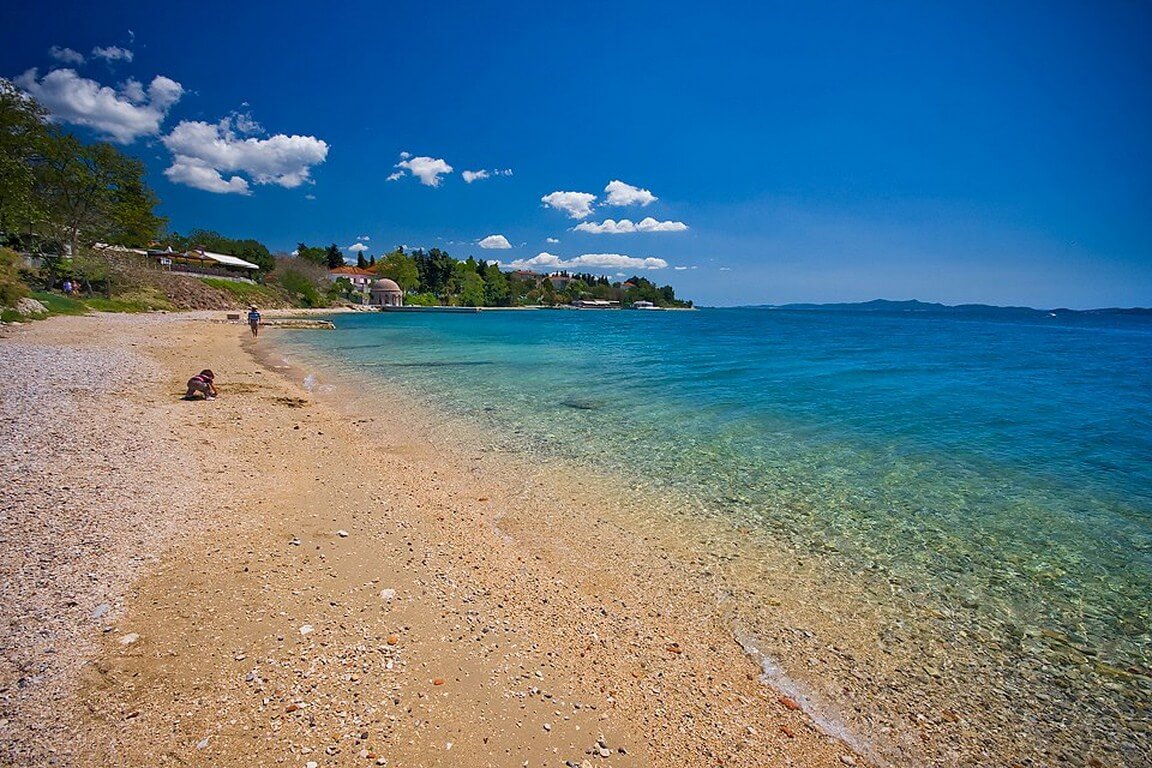 In the city center there is a pebble beach Puntamika, which fits perfectly into the plan of a full day trip to Zadar. After a walk through the city center, go down to this beach, change in one of the locker rooms and relax in the calm sea. The access to this beach is pleasant and there are enough shallows for children to play.

If you feel like eating or drinking while you are here, you do not have to go back to the center because there is a restaurant on the beach. From here you can enjoy a magical view of the nearby Lantern lighthouse and the old town with its bell towers. 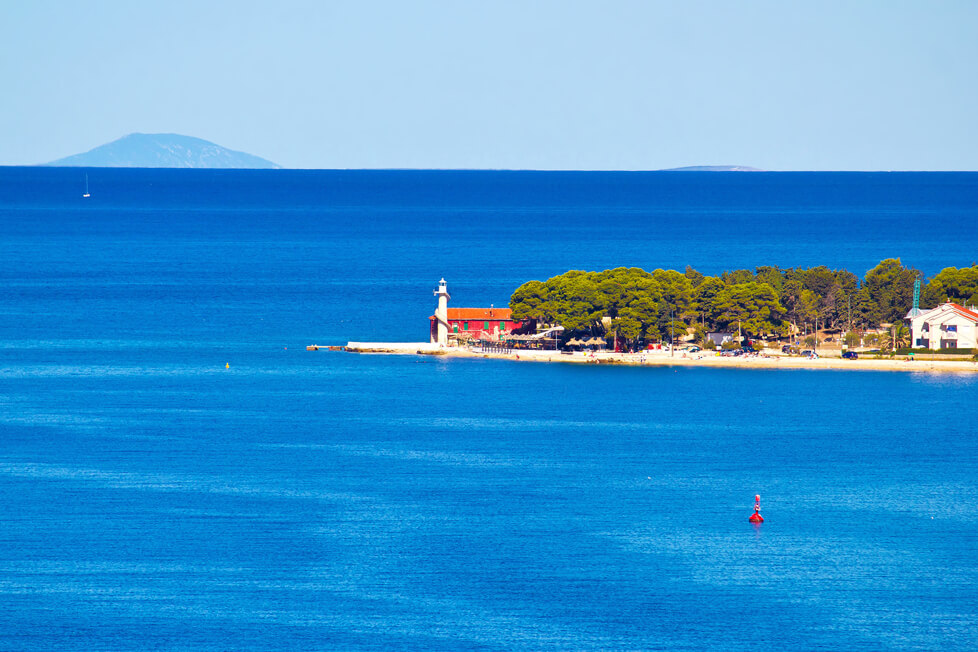 The most beautiful beaches around Zadar

If you want to move a little further from the center of Zadar for more privacy or you just need a break from the city environment, there is a really huge selection of beaches near the city. We have chosen our top three beaches in the vicinity of Zadar for you.

Only 16 km away from Zadar near the town of Nin, approximately 20 minutes drive, lies the fabulous Nin Lagoon with its five sandy beaches. Within it is the famous Queen's Beach, which is known for the healing mud that is located on it. While the children are playing in the sand and swimming in the shallows, you can give yourself a little breather and smear yourself with this healing mud like children did. After that, you can also play in the shallows with kids or maybe play a round of „picigin“.

Access to this beach is a bit longer because it can be reached from Zadar only by ferry or a catamaran. We recommend that you go by car and ferry so that, upon arrival on Dugi otok, you can freely explore the island.

An hour of ferry ride is definitely worth it because you are greeted by turquoise blue sea and white sand. And you can get away from the hot sand whenever you want in the natural shade of the pines.

In addition to daytime activities, this beach also offers nightly entertainment, so it is worth staying on the island longer. 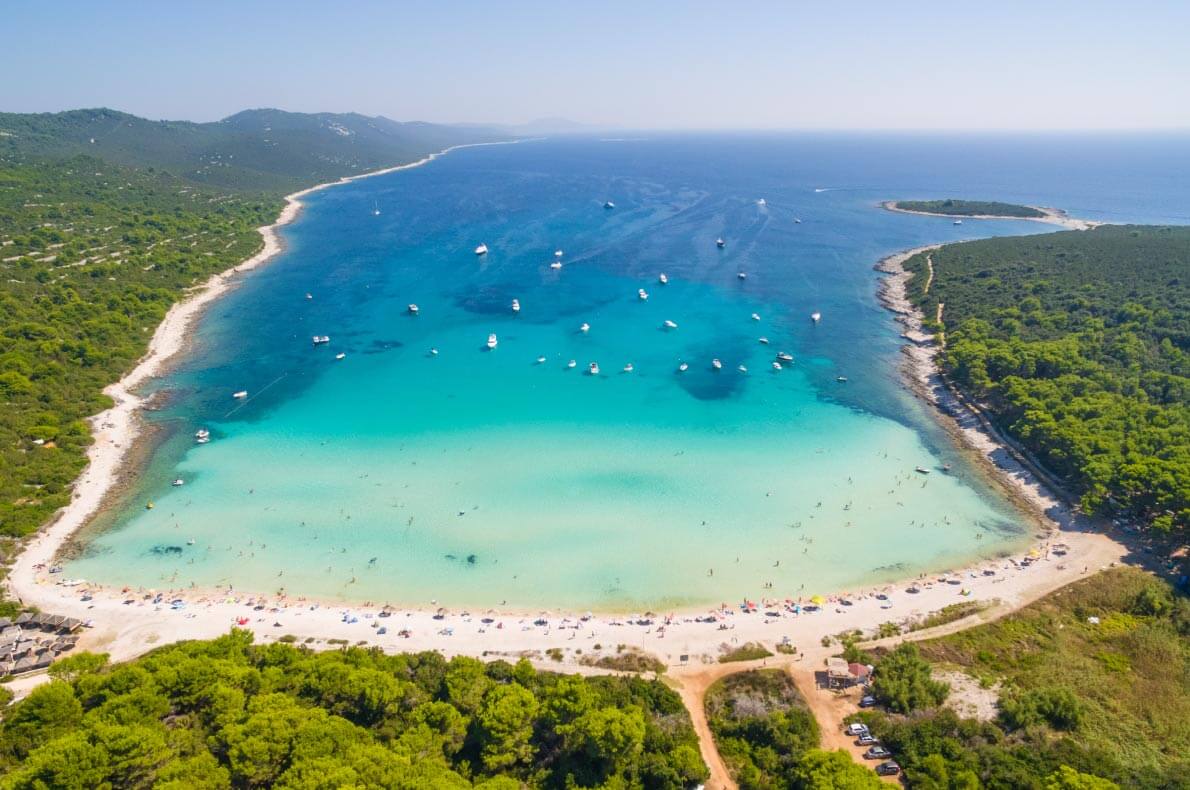 Zrće on the island of Pag

Several "scales" above Sakarun is the world famous nightlife destinationZrćelocated. This sandy beach in Novalja city on the Island of Pag is famous for its day and night entertainment. Although the parties last all day, you can have fun in other ways as well. Try diving, surfing, jet skiing, adrenaline bungee jumping or just stay dancing on the beach. Fun is here at every turn. And imagine - Zrće is just a bit over an hour's drive from Zadar! 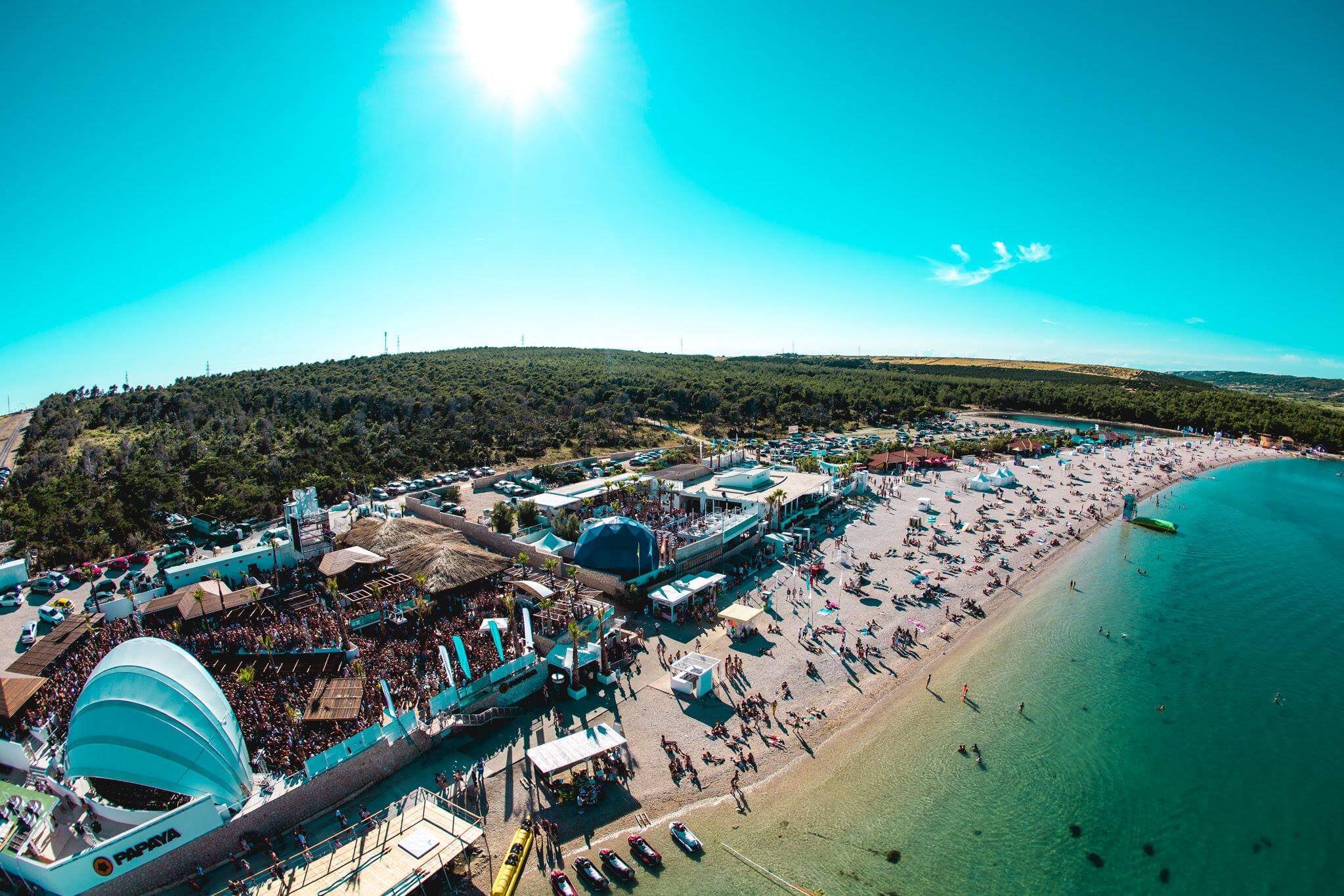 If Zrće is too loud for you, there is Beritnica beach nearby, which is almost the opposite. On this pebble beach you may hear echoes of music from Zrće, but this beach is otherwise extremely quiet. It is partly due to the slightly difficult access because, to get to it, you need to first reach the nearby Metajna or Prnjica beach by car, and then walk along the coast to Beritnica.

Swimmers will enjoy the crystal clear sea on this beach, couples will adore the beautiful view, climbers can explore the nearby climbing area "Stogaj", and nature lovers will be stunned wherever they turn. This pristine beach (yes - there are no restaurants on it in the vicinity of 2 km!) provides a holiday in peace and quiet ... except during the Life on Mars race!

This trail running or trekking race attracts more and more people every year, so Beritnica, through which they run, can be quite frequent on that day. But this race is usually organized in February or March so if you go in the summer months, you won’t have to worry about your runners starting to cross over your towels.

From sandy beaches to pebble ones, party centers and oases of peace, inside and around Zadar you can find a beach for everyone's enjoyment. Whether you go alone, as pairs, with family or friends, you will always find at least one beach that suits you. And if you get tired of swimming (which we doubt if you go to one of the beaches we recommended), you always have something to do in Zadar! 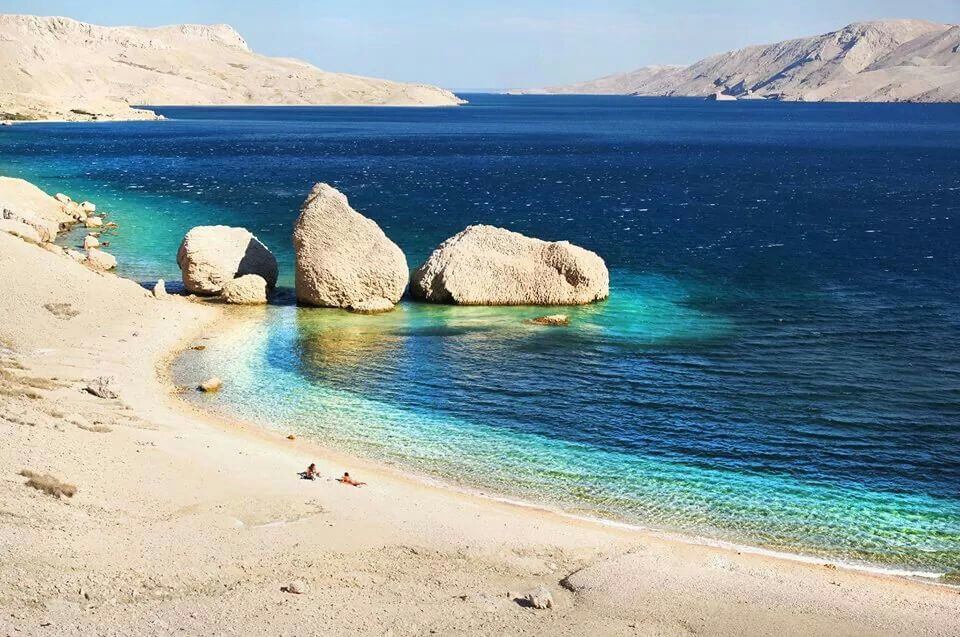 Where to swim if we spend the summer in Zadar?

If you prefer sandy beaches, we recommend Borik beach in Zadar city, and in its surroundings are a great choices Queen's Beach in Nin or Zrće on the nearby Island of Pag. If you are looking for pebble beaches, Kolovare and Puntamika are located right next to Zadar's historic center. Beritnica beach not far from Zrće is one of the best choices among pebble beaches near Zadar.

How to get to Sakarun?

Sakarun can be reached by ferry or a catamaran straight from Zadar.Sakarunis located on the Island of Dugi Rat, however, you can't get straight to the beach by boat. You can travel around the island by car (which we recommend) or by bus, or even rent a bike. From Zadar just look for a ferry ticket to Brbinj on Dugi Otok and you are already far more than half way to the beach!

How to get to the beach Beritnica?

Beritnica is a hidden beach about 12 km away from Novalja on the Island of Pag. It can be reached by car (either by bike or by foot - which may not be the best choice in strong sunlight) to the nearby town of Metajna or Prnjica beach. From there it is only a short walk along the coast to Beritnica. 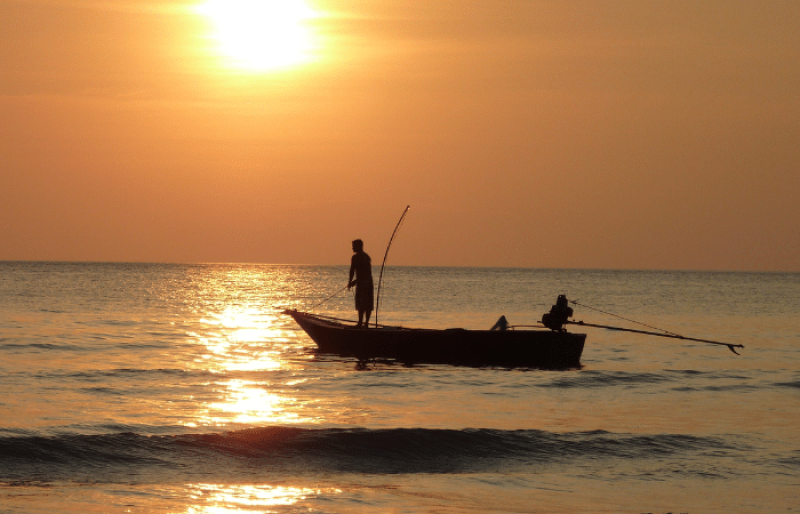 Croatia's coast certainly has a lot to offer. Picturesque towns and villages, amazing islands and fantastic beaches are the main r... 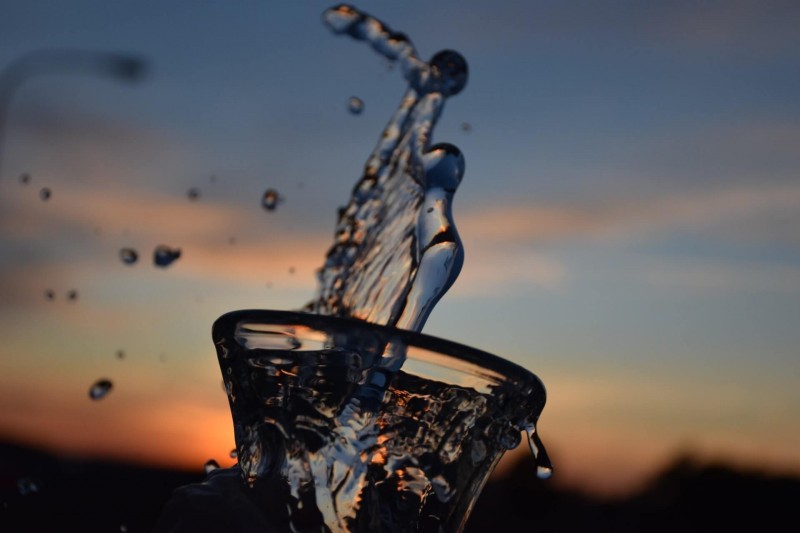 In Croatia, the use of tap water for various everyday things such as cooking or drinking is completely normal, something we do not hesitate...

Best things to do in Makarska

Beaches and scenery are not the only things that can make a vacation more enjoyable - taking notes of the best things to do in Makarska migh...