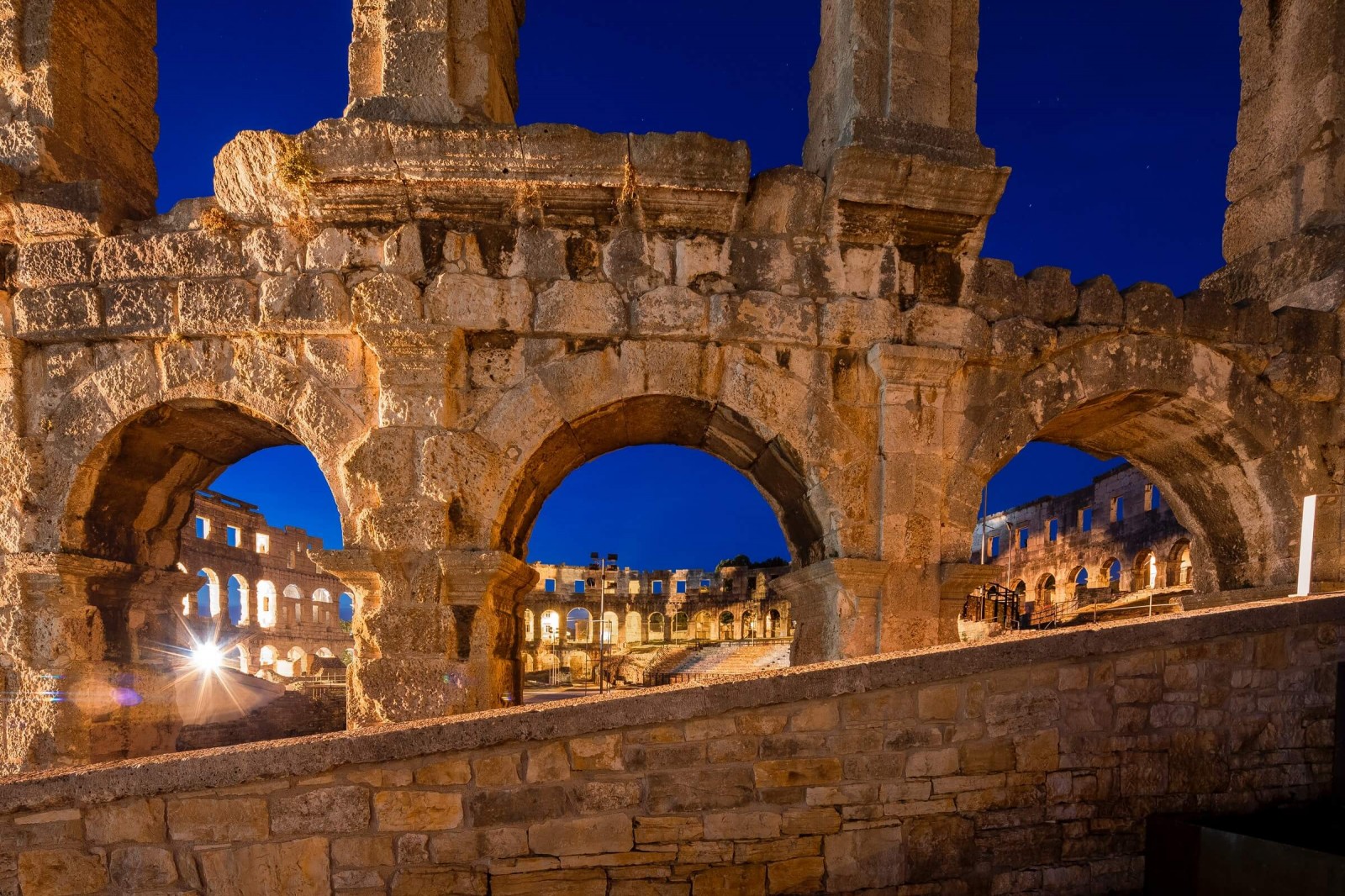 Even in the 8th century BC there was story of searching for the golden fleece of the mythical winged ram whose trail the Argonauts followed. Having conquered the fleece, the leader of the Argonauts, Jason, was to become king of Iolka. Tradition says that the Argonauts succeeded in their intention and, fleeing the Colchians from the Black Sea from whom they stole the fleece, came to Pula. Hence the ancient name of the city - Polai or the city of fugitives. An interesting start, isn't it?

The history of Pula dates back to prehistory, but continues into ancient times, through the Middle Ages, the Renaissance and beyond. Numerous cultures and traditions are intertwined in this city. Its rich cultural history is just one of the things that attracts many tourists to visit the city today. After all, its position on the Adriatic coast and the bay that has long provided shelter, has enabled the development of this ancient city.

Pula is today the largest city in Istria where there is certainly a lot to see. Here we tried to gather a selection of the 10 most famous sights of Pula, although the choice was not easy.

This amphitheater, in which gladiatorial battles were fought, animal fights and entertained numerous audiences, continues its tradition in a much less aggressive form today. Instead of watching the battles, visitors can follow the Feature Film Festival and tour the exhibitions each year.

The interesting thing about the Pula Arena is that it reached the Guinness Book of Records thanks to the 800 kg heavy tie with which it was wrapped in 2003 as an art installation. Yes, indeed this tie (both a symbol of Croatia and in fact an original Croatian invention) 808 meters long adorned the amphitheater. 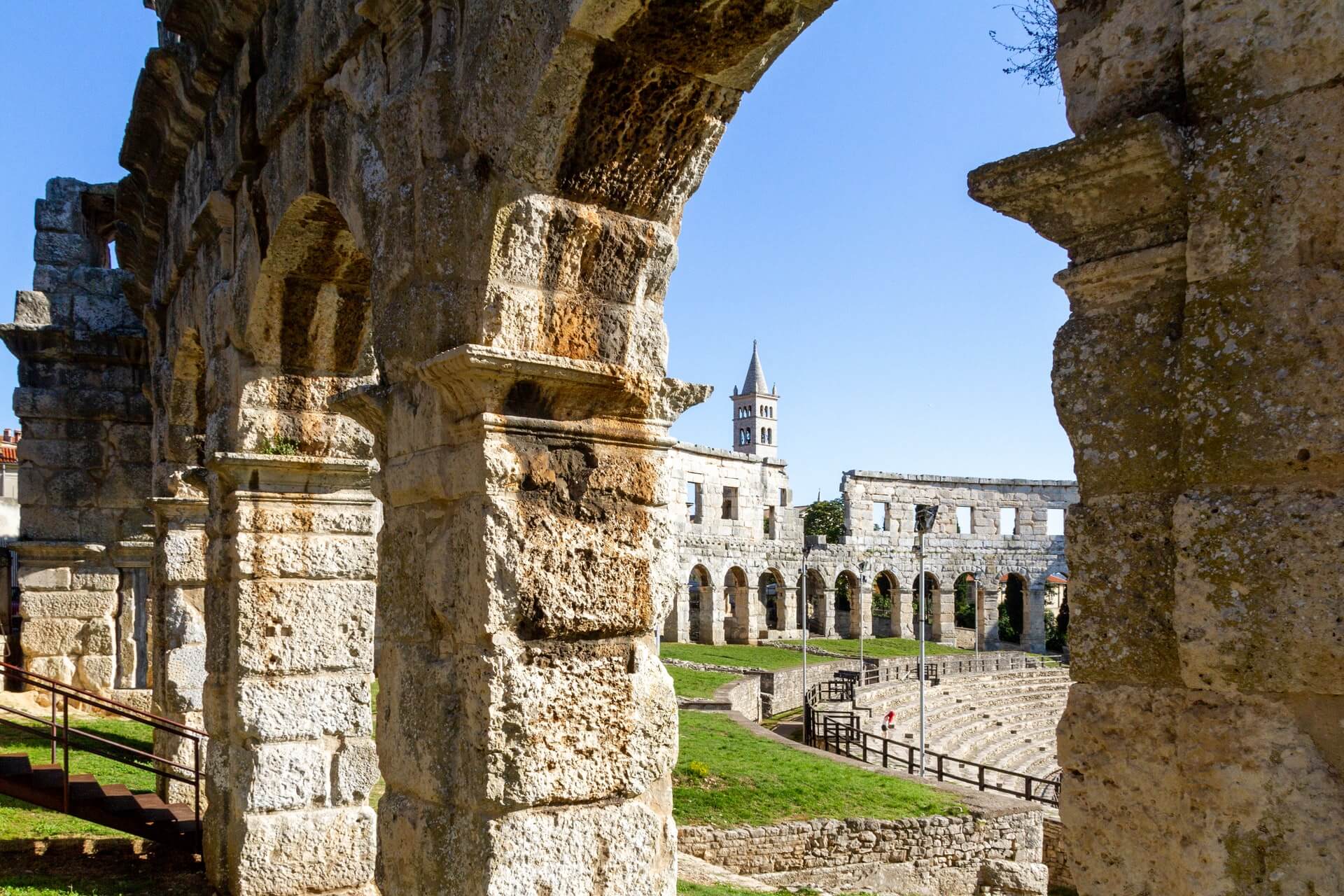 Not far from Pula is a perfect, idyllic destination for day trips - Brijuni National Park. A short drive to Fažana and then a pleasant boat ride to the island of Veliki Brijun opens up countless options for entertainment and cultural uplift.

From Roman ruins to dinosaur footprints, through golf courses, safaris and beautiful beaches with clear sea, Brijuni can offer something for every visitor. 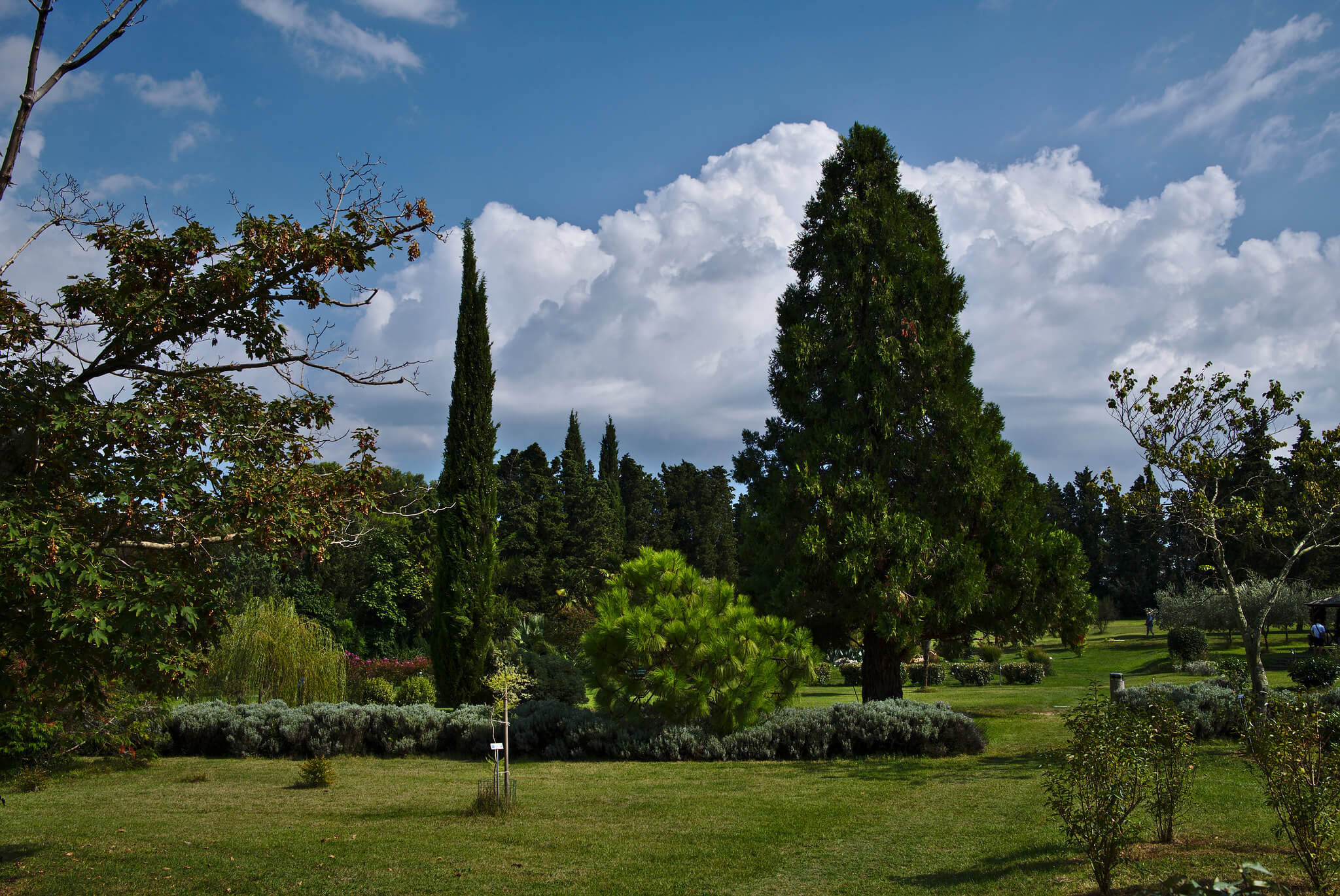 3. The Arc of the Sergii or the Golden Gate

This triumphal arch, named after the family that had it built in the 3rd decade BC was also called the Porta Aurea or Golden Gate because of its function as one of the main city gates, and because of the rich gilded stone ornaments. In addition to the Golden Gate, the Hercules Gate (the oldest gate in Pula) and the Double Gate have been preserved today.

This triumphal arch, in accordance with Roman tradition, celebrates senior officials, in this case three members of the Sergius family who held high positions in Pula.
For all lovers of culture, this triumphal arch is an unavoidable point not only because of its ancient history, but also because of the numerous theatrical and choral performances to which it provides the perfect scene during summer months. 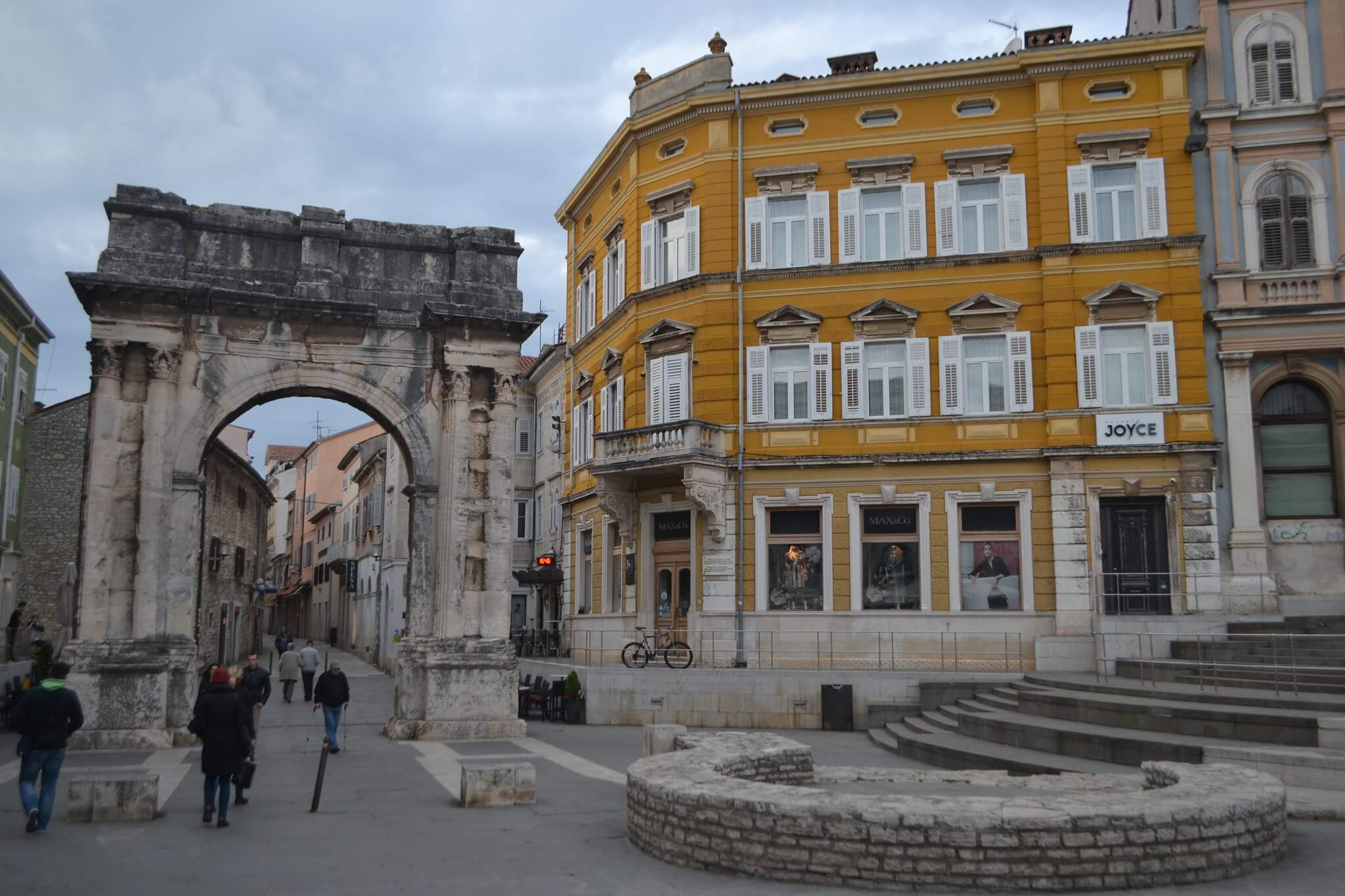 Making a historic leap from ancient times to the First World War, we "pass" through underground tunnels that served to shelter the inhabitants of Pula in case of air attacks. This network of tunnels extends almost throughout whole city of Pula and includes shelters, galleries, trenches, passages, weapons depots and communication corridors.

Since Pula is located at the foot of seven hills, these tunnels represent a serious engineering feat because the hills had to be drilled for their construction. The castle below which the tunnels meet also has a rich history as an Austro-Hungarian barracks, warehouse and prison.

And don't worry, the tunnels are 2.5 m high and 3-6 meters wide, so you can move freely in them even if you are a little claustrophobic. These spaces were finally able to comfortably accommodate 6,000 people, which is a real advantage for organizing exhibitions and night parties today. 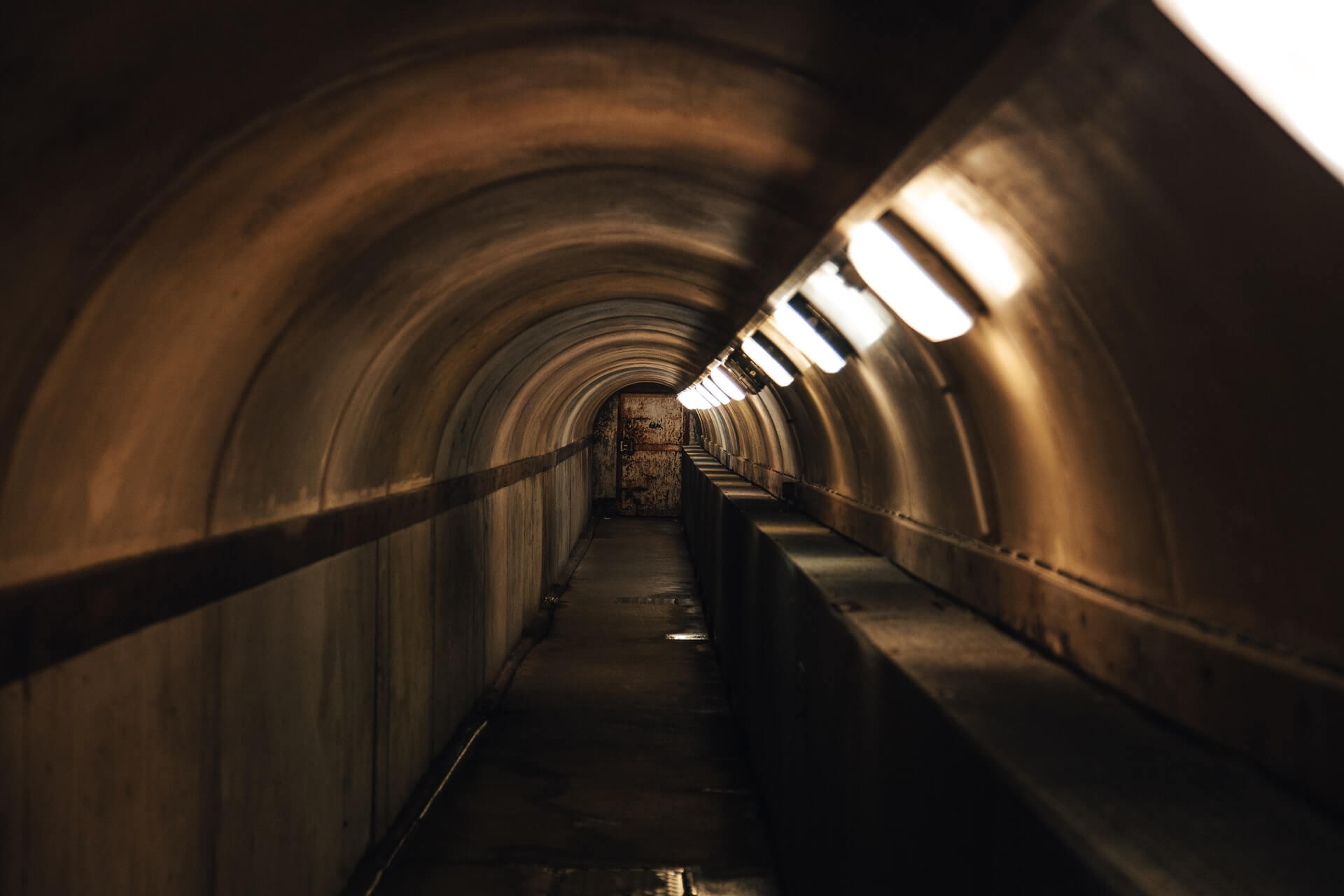 Pula Cathedral was built on the foundations of an early Christian church from the end of the 4th and the beginning of the 5th century. But it is believed that during the Roman persecutions Pula Cathedral was a place of secret religious gatherings.

Since then, a building has been built on that site, and the cathedral itself has undergone numerous changes. Today's form was mostly acquired thanks to additions in the 5th century and today it is the center of the Bishop of Poreč and Pula. For all believers, important are the relics of St. George, St. Theodora, st. Dimitrija, st. Basil, St. Flora and Blessed Solomon, which are kept here. 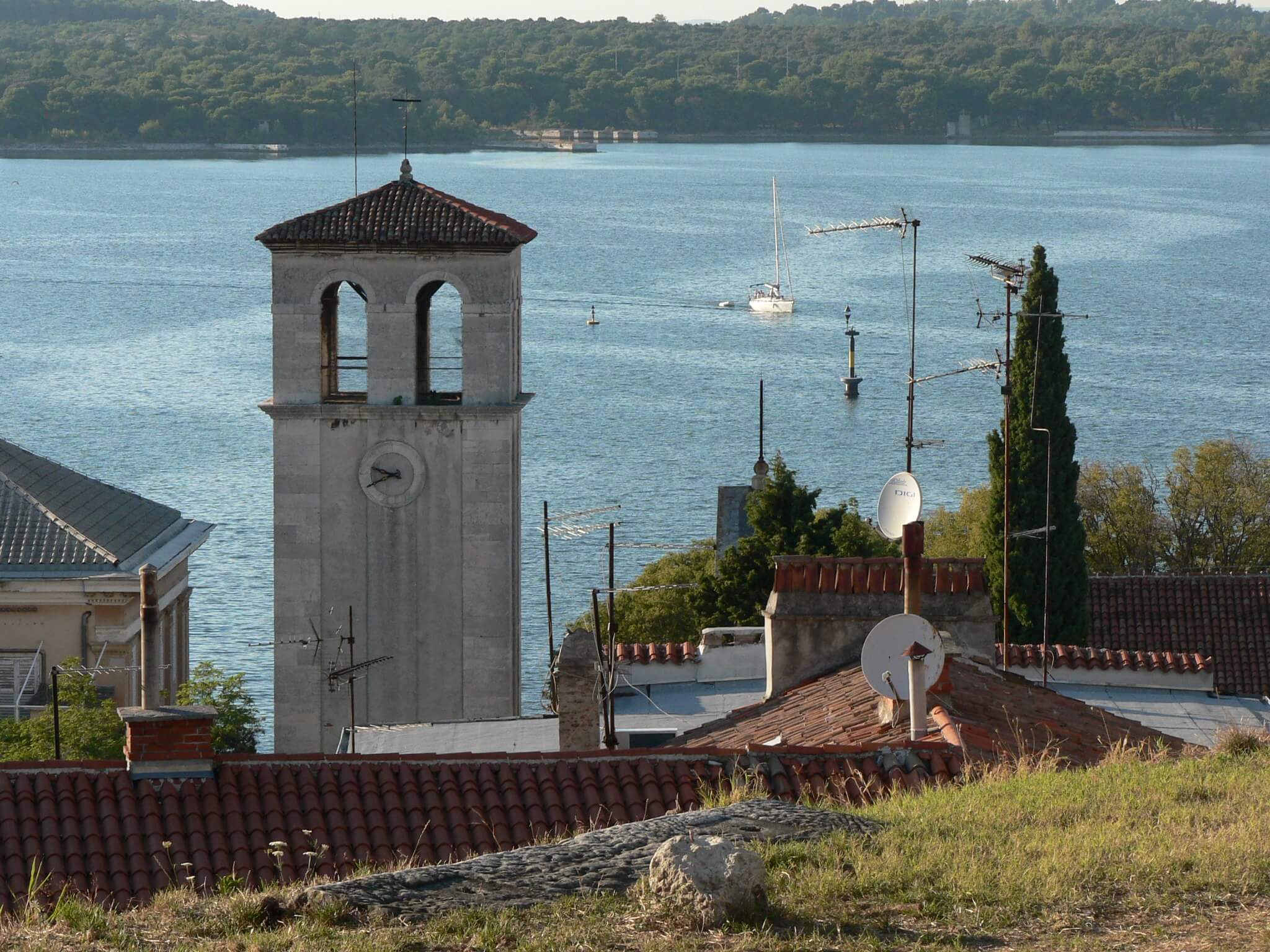 With such a clear sea, it is not surprising that Pula boasts one of the richest and most visited aquariums in all of Croatia. The Pula Aquarium is located in the Austro-Hungarian fortress Verudele, which has been repurposed today and "hosts" a number of sea animals such as favorite seahorses, but also jellyfish and sharks.

The aquarium is known for its ecological character and seahorse recovery center and is a refuge for today's protected red-eared turtles. As part of the aquarium, the exhibition "Evolution" is very popular, which presents living fossils and reptiles in an educational way. A children’s playground and terrace allow visitors to take a break after sighing while touring the aquarium. 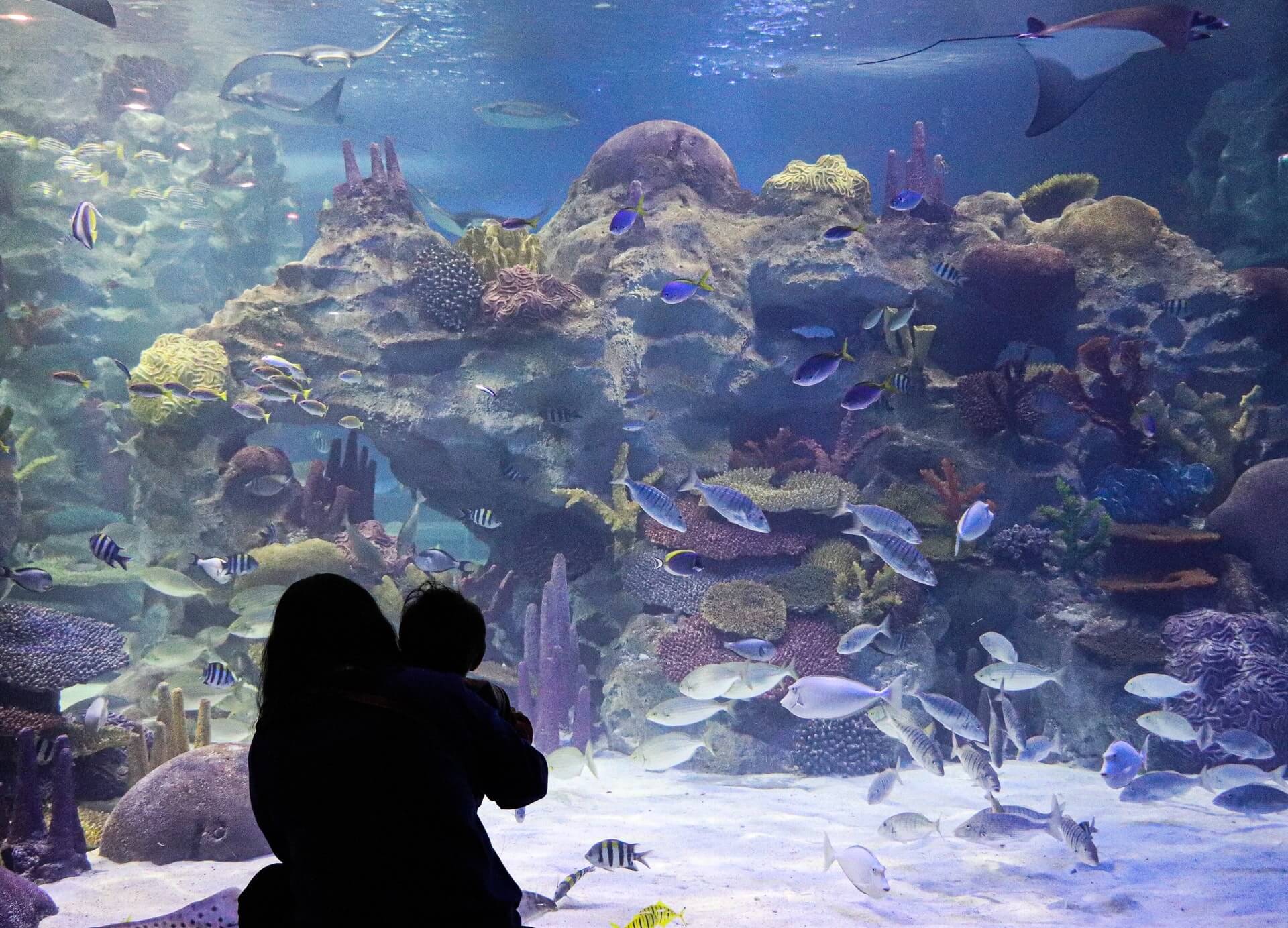 The terms amphitheater and theater should not be confused. While the amphitheater was more like today’s sports arena, theaters were the venue for performances. This small theater from the 1st century testifies to the high cultural level of development of Pula. It has been preserved in fragments, but enough to hint at its size - enough for 4-5 thousand spectators (the entire population of the former Pula!). Not bad for a "small" theater at all. 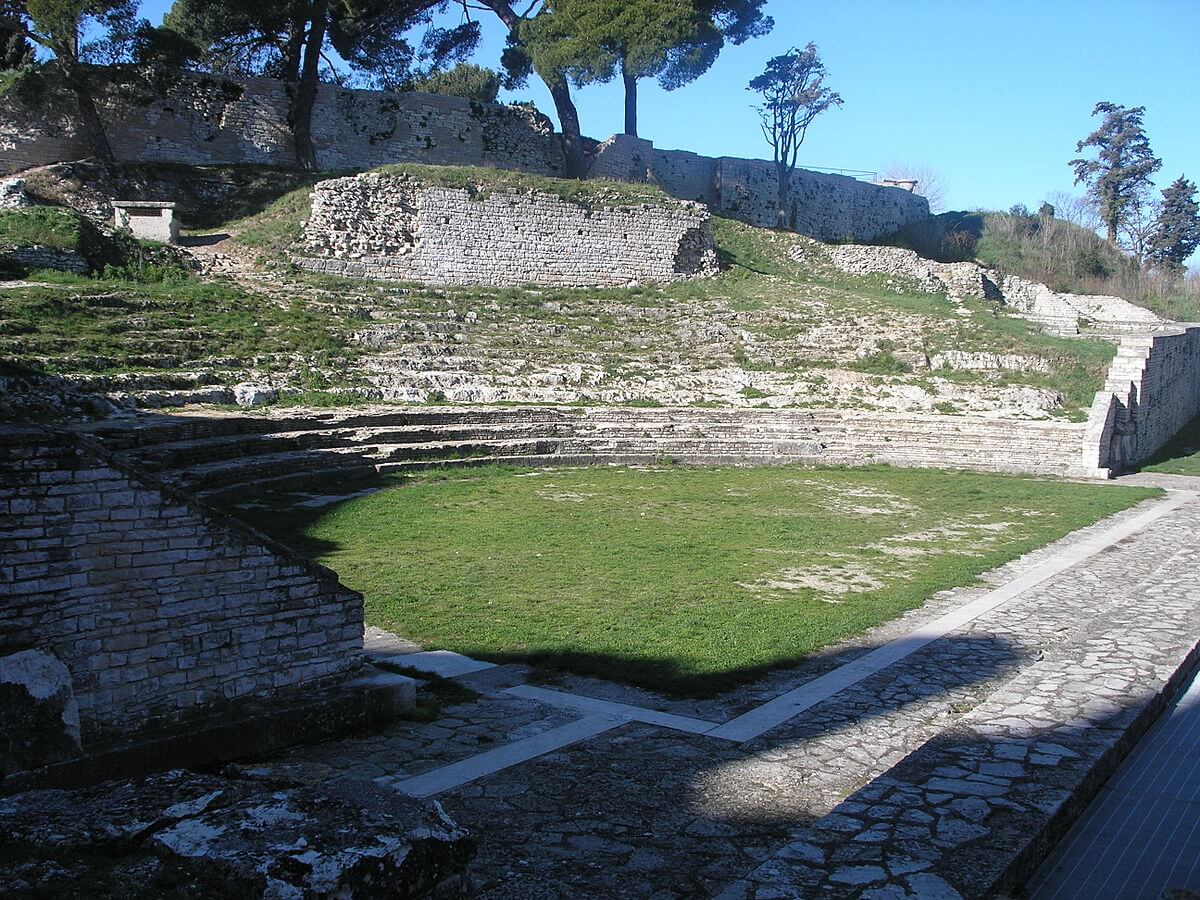 This forum, the central town meeting place and square, was created by embankment of the coast in the 1st century BC. As in every Roman forum, there were buildings that had religious, judicial, administrative and economic purposes. Among others, there were several temples on it. One was dedicated to Jupiter, Juno and Minerva, and the other to Augustus. The third, whose back wall has been preserved, became an integral part of the 13th-century town hall. 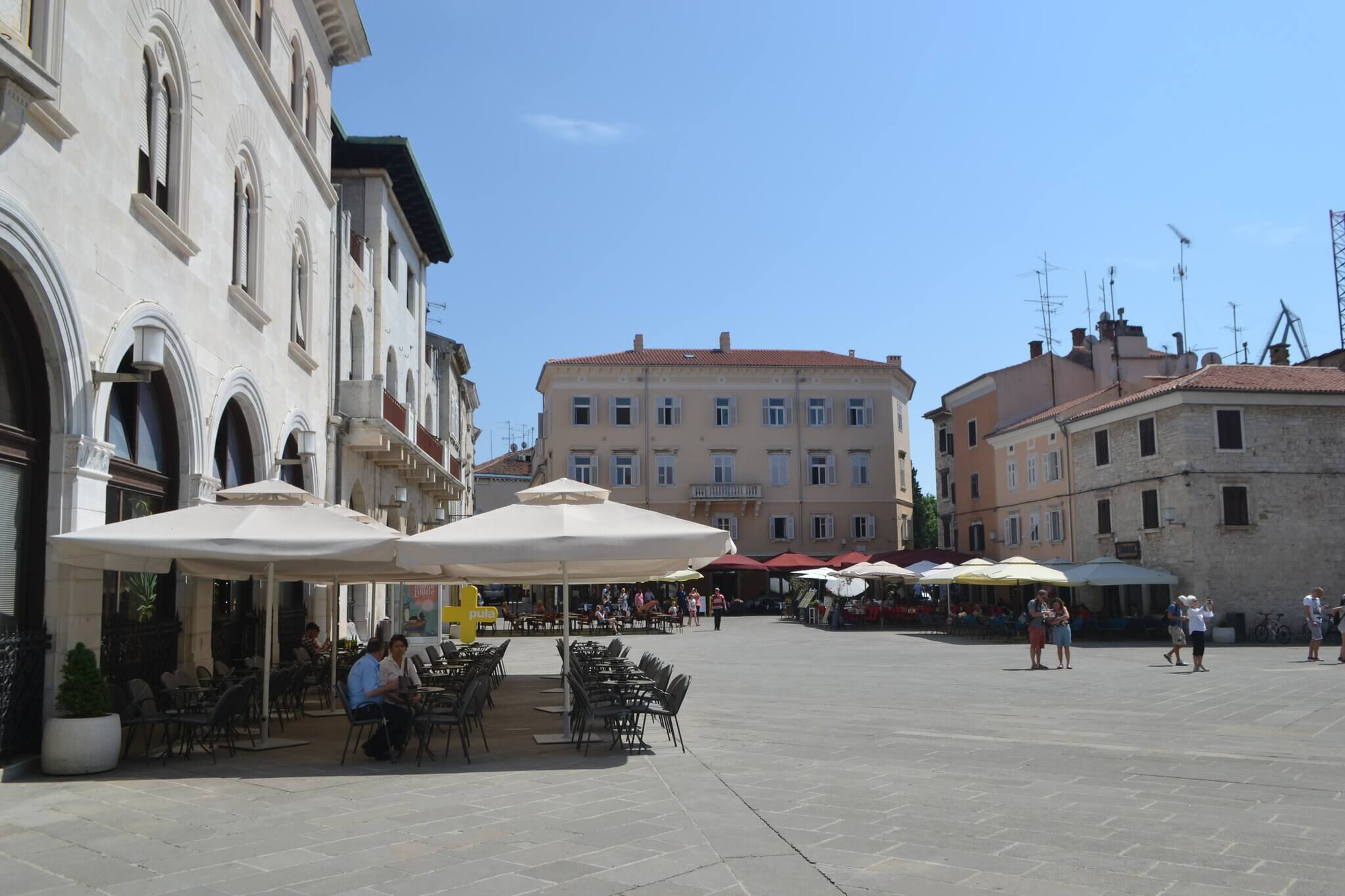 9. Church and monastery of St. Francis

Not far from the Forum, on the way to the medieval fortress, there is a monastery and the church of St. Francis. This complex was created shortly after the founding of the Franciscan Order (1209) and completed in the late 1970s. This excellent example of a classical Franciscan monastery embodies Franciscan simplicity and boldness, but also reflects the quality of workmanship.

Visitors to the church today are attracted by one of the most precious examples of wooden Gothic sculpture in Istria that adorns the altar, but also a unique combination of Gothic forms, Mediterranean architectural style and early Renaissance elements of the cloister within the monastery. 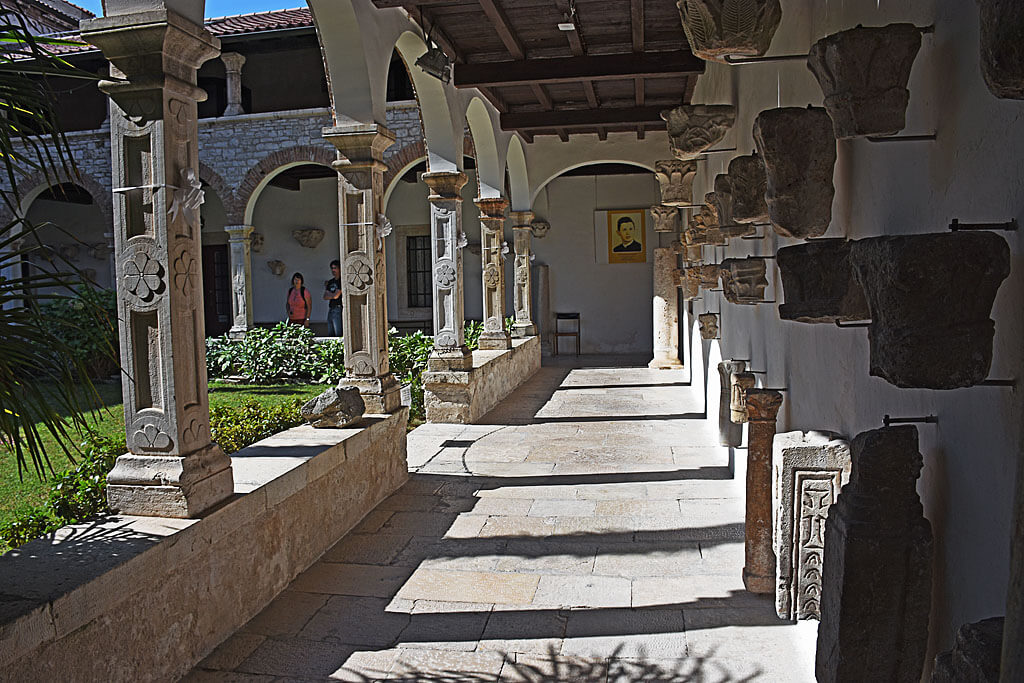 Built in honor of the Roman Emperor Augustus between 2 BC and 14 BC, is a prime example of Roman architecture, made of perfectly regular square blocks of stone. In Byzantine times, the temple was turned into a church, then into a granary, and since the beginning of the 19th century it has served as a museum of stone monuments.
Today’s temple is a faithful reconstruction of the original that was largely destroyed in bombing during World War II, and was visited by lovers of ancient art as it preserves numerous stone and bronze Roman statues.

If you want to live like an emperor for a short time and really enjoy seeing the many sights of Pula, the right choice is the one that gives you peace and comfort. Renting a luxury villa for your family or group of friends will allow you an uninterrupted vacation, and also visits to the city center and the surrounding beauties whenever you want.
After all, Dalmatia has been known for centuries for building mansions and villas - for a reason. Mild climate, light breeze, healing sea and relaxing sun are just some of the benefits that the Mediterranean has to offer. As the Roman poet Horace would say: Carpe diem - take advantage of the day. 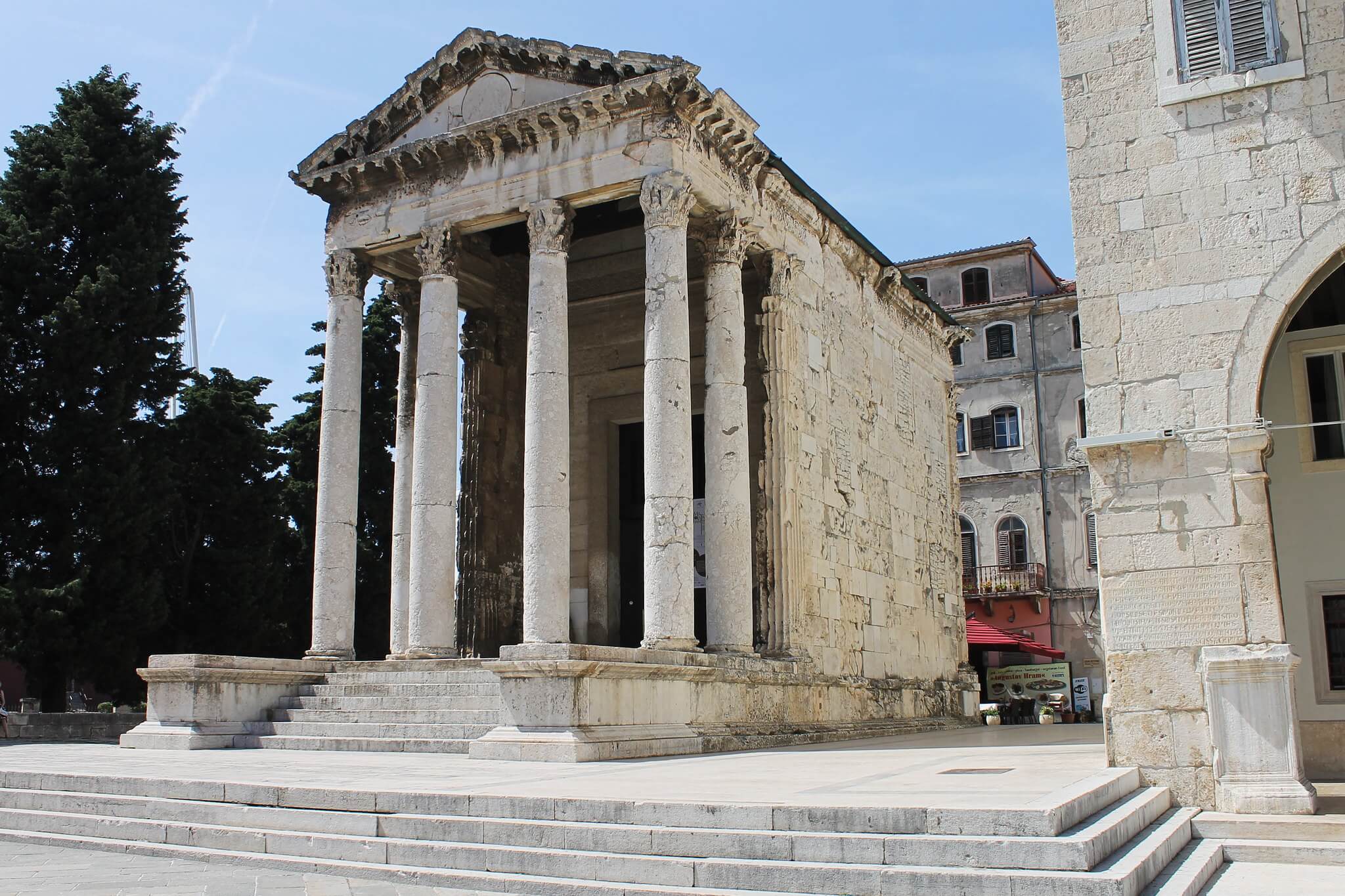 What to visit in Pula?

There is something for everyone in Pula. Cultural sights include ancient Roman monuments such as the amphitheater (Pula Arena), theater, city gates and forum. Religious sights such as the church and monastery of St. Francis will give you a little serenity while touring this city which is full of other cultural events like outdoor performances and exhibitions. Entertainment is guaranteed further with a rich gastronomic offer, in the Pula Aquarium, at parties within the underground tunnels or on excursions and safaris within the Brijuni National Park.

How did Pula get the name?

The Greek word Polai, translated as "city of fugitives", speaks of the mythical origin of the city in which the Argonauts sought refuge to escape with a magical golden fleece.

How many people can fit in the Arena in Pula?

The Pula arena can accommodate 5,000 people today, but you should know that in ancient times it was much larger and therefore could accommodate significantly more people - some consider even four times more than this number at its peak.

What are the best attractions in Pula?

Among the many sights it is difficult to choose the best - it depends on your interests. If you are interested in prehistory, you will visit the nearby Šandalja cave. For lovers of antiquity, there is the Pula Arena, a small theater, a forum, the Temple of Augustus and several city gates. Historians among you will enjoy a tour of the network of underground tunnels from the First World War, and "naturalists" will want to visit the aquarium or nearby Brijuni.