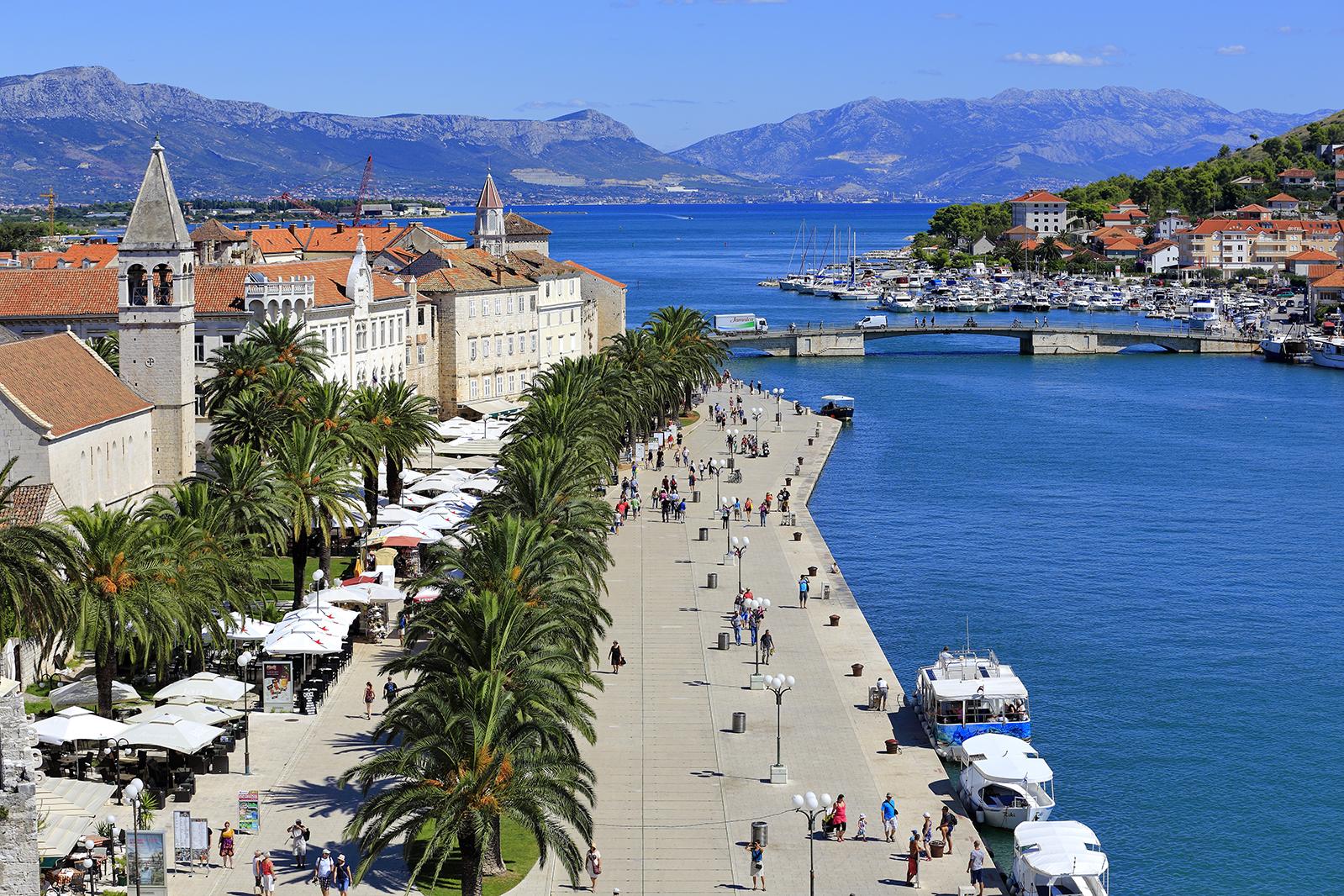 Welcome to the city of Trogir, a city rich in culture and historical significance. The orthogonal street plan of this medieval island settlement dates back to the Hellenistic period and it was embellished by successive rulers with many fine public and domestic buildings and fortifications. Its beautiful Romanesque churches are complemented by the outstanding Renaissance and Baroque buildings from the Venetian period.

Its rich history dates back 2,300 years ago. Founded by the Greeks from the island of Vis Croatia in the 3rd century BC and they named it Tragurion. Later it was occupied by the Romans and after them the Venetians. It was also ruled by Hungarian and Croatian families and also occupied by the French in the beginning of the 19th. century. How is that for a diverse history?

Today, Trogir is a UNESCO World Heritage Site gorgeously set within medieval walls and a real hidden jewel of the Mediterranean with a lot of cultural and historical heritage to offer! Did you know that Game of Thrones was also filmed in Trogir!? Let's take a look at the most interesting sights of Trogir. 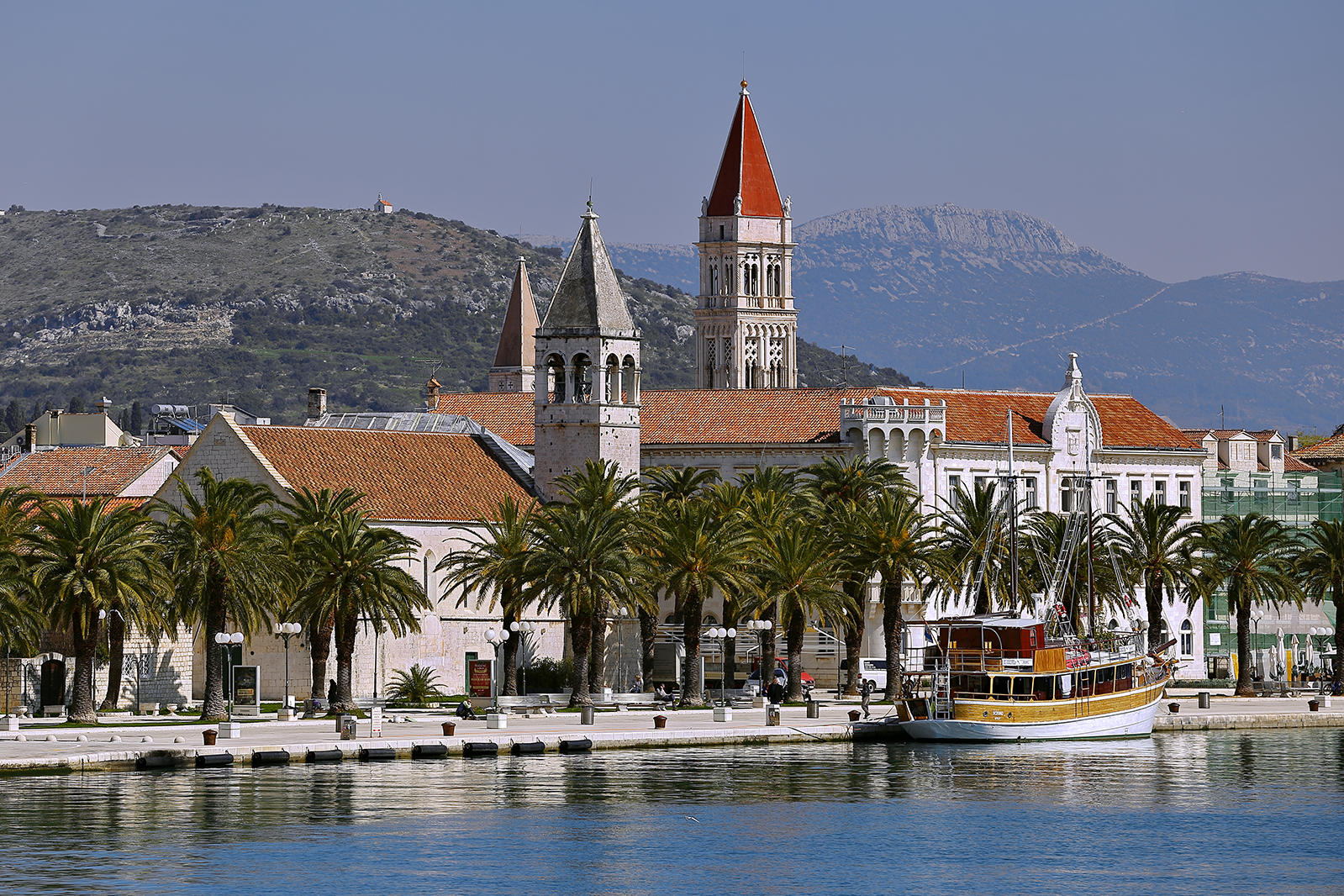 Your first spot should be the Cathedral of St. Lawrence. A highlight is the magnificent Romanesque doorway carved by Master Radovan, one of Croatia’s finest an most famous builders in 1240. On the outer edge of the doorway are two lions and two statues representing Adam and Eve. Overcome your fear of heights and climb on top of the cathedral's 47 meter tall bell tower and be ready for it to leave you speechless! A must see within the cathedral is the Chapel of St John, built in 1468, and which is considered the best Renaissance sight in Dalmatia. 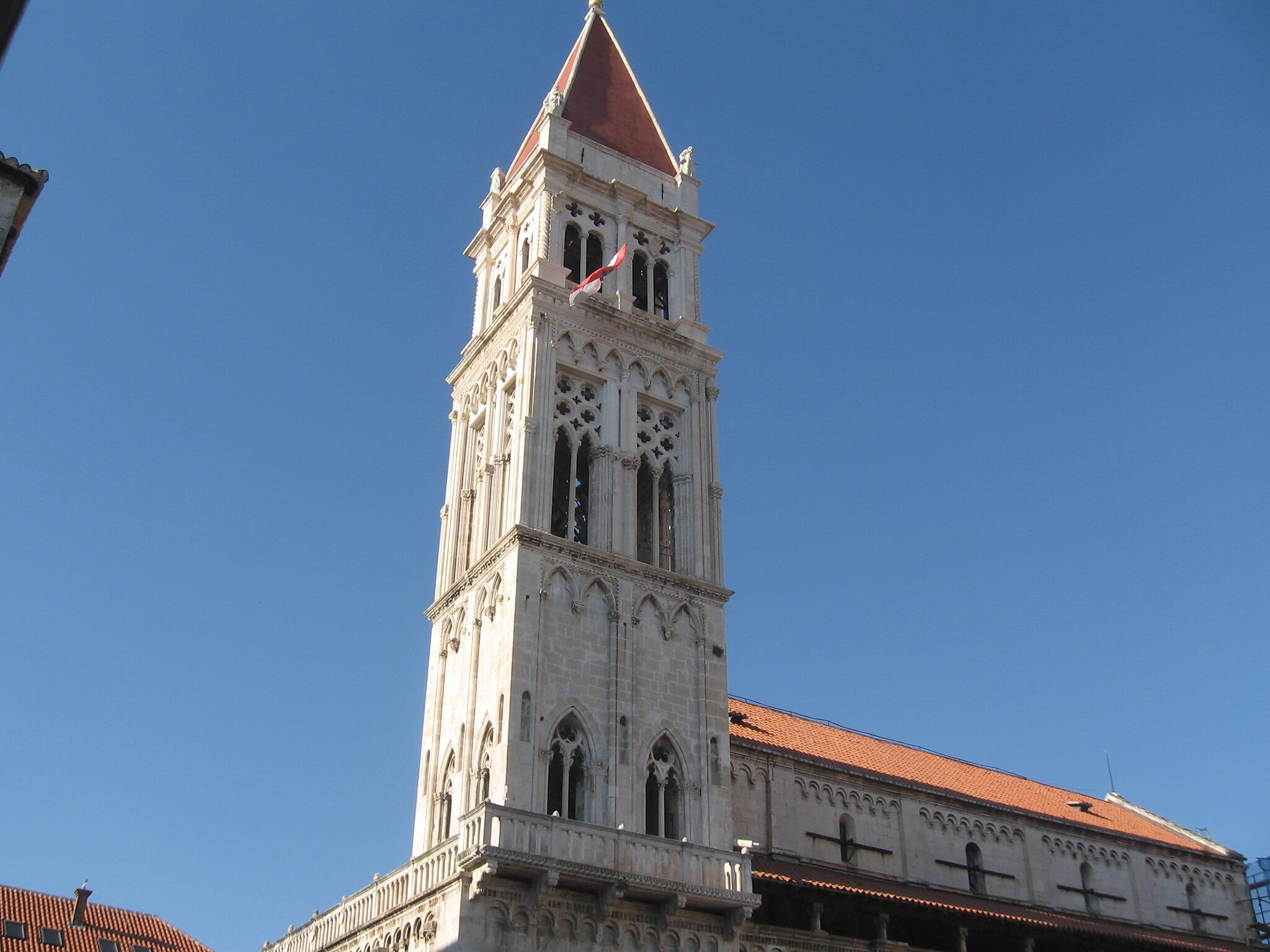 Next are the city walls built between the 13th and 14th century and the gate built in 1593. The two towers adjacent to the gates date back to the 13th century, as well.

The city walls serve as an entrance to Trogir's old town, one of the best-preserved old towns in Europe and a collection of some very impressive pieces of architecture. A wonderful small loggia is right next to the entrance, a place where weary travelers could take shelter. In the 20th century, it was used as a fish market, but now it is a place where you can find some awesome souvenirs.

The city's fortifications don't end there, however, because the awesome Kamerlengo Fortress and the Tower of St. Mark, also stand guard over it. 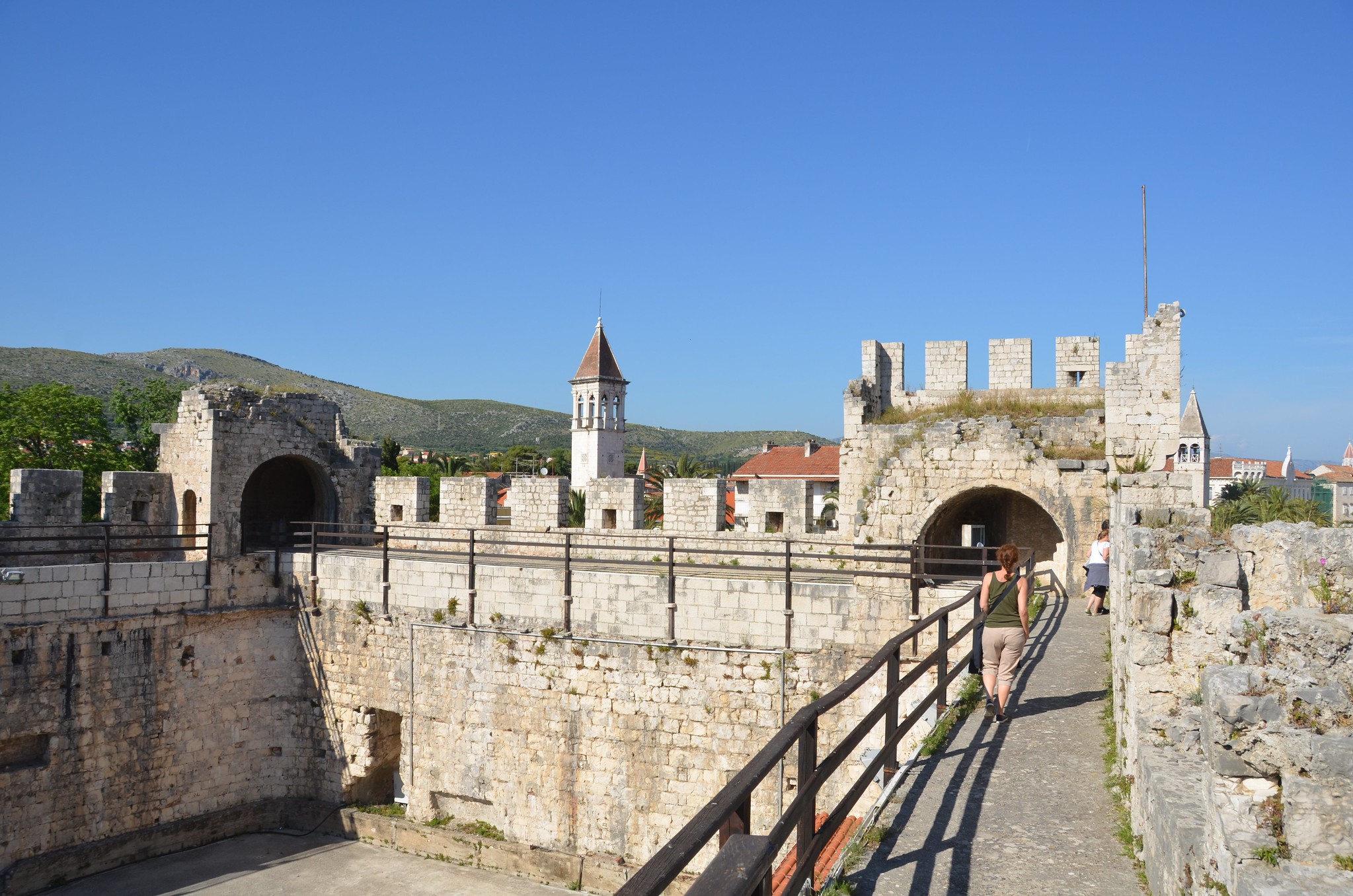 Many more sights await, like Cipiko palaces, home of the town's noble family in the 15th century as well as the city loggia near the cathedral.

The palace itself is an amalgamation of two different Romanesque buildings, and the oldest part of the palace goes back all the was to the Early Middle Ages. Most of the complex, however, dates from the 13th century.

In the 15th century, the Cipiko family, respected even today for its role in the town's development, hired some of the most esteemed artists of the time to completely renovate the whole palace. Because of that, the palace today contains many priceless works of art, most notable of which is a Gothic triphora. The southern portal of the palace is another exquisite piece, combining Renaissance and late-Gothic elements into an awe-inspiring whole.

Because of all that, a visit to this wonderful sight is pretty much a must, and just a step into the palace's courtyard will make your day. 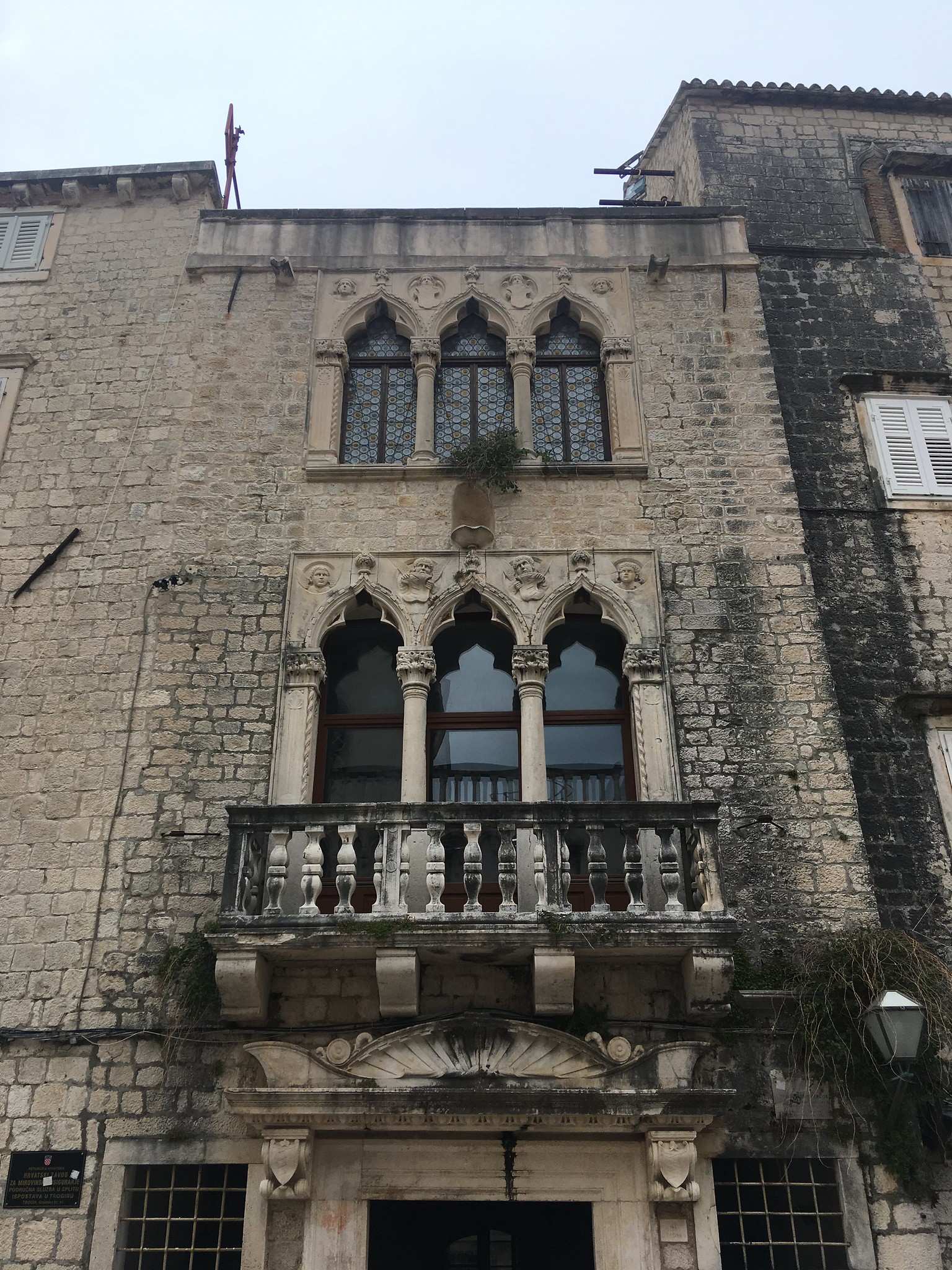 The symbol of town Trogir is Kairos. In Greek mythology, Kairos was the god of opportunity, luck and favorable moment. According to a legend, he must be grasped by his tuft of hair, otherwise the moment flies away and it cannot be caught anymore! Be sure to rent villa in Trogir and start your journey with this tiny picturesque town in Croatia!